Less than a year after being crowned the winner of the 15th season of NBC's "The Voice," Chevel Shepherd finds herself still in a whirlwind.

ALBUQUERQUE — Less than a year after being crowned the winner of the 15th season of NBC's "The Voice," Chevel Shepherd finds herself still in a whirlwind.

It's still a very good thing for the now 17-year-old country singer.

She's traveled across the country either opening for other country artists or headlining a few of her own shows.

In New Mexico, she recently opened for Little Big Town in Albuquerque and Lee Brice in Ruidoso.

Her next opening gig is tonight, July 5, when the Farmington native will open for the Brothers Osborne.

MORE: Chevel Shepherd has been busy since winning 'The Voice'

"It's crazy to think how far I've come," she says. "It's good to hear that people are wanting to hear me sing and watch me perform. It's been nonstop since I've been on the show."

After being crowned the winner of "The Voice" in December, Shepherd hit the music circuit quickly.

She's also been working on music for her debut album.

"I haven't started recording yet," she says. "I'm putting together the songs that will be on there, though I haven't officially starting writing any of my own material just yet."

Being able to perform shows in New Mexico remains a humbling experience for the teen.

"I'm overwhelmed that I've had so much support from New Mexicans," she says. "I love where I'm from."

Shepherd continues to perfect her sets and works almost every day on executing a dynamic show.

Between original music and cover songs, she constantly wants to make her set better. 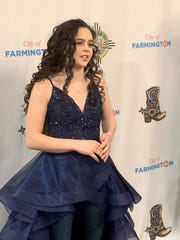 Now 17, Shepherd has also noticed that her voice has grown stronger since being on "The Voice."

"People tell me that there's more power in my voice," she admits. "I've been taking care of it really well. I warm up each time I sing and practice for more than an hour every day. I exercise my diaphragm. I can feel the difference in my voice now."

Months after being thrust into the national spotlight, Shepherd is grateful to be along for the ride.

"I'm taking each moment in," she says. "Meeting a lot of the other country singers has helped me, because they are examples of what I want my career to be like. They have time to talk with me and be genuine with the advice.