Artist Joe Wos creates hundreds of mazes each year, most of them for his syndicated newspaper cartoon. Mike Easterling/The Daily Times
Fullscreen 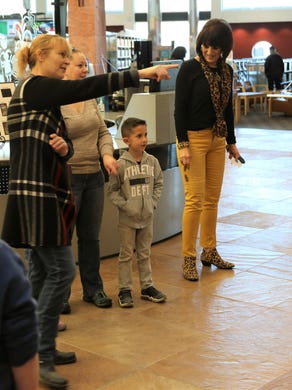 Maze artist Joe Wos draws a rocket ship as part of a maze mural with a space theme that he created Tuesday at the Farmington Public Library. Mike Easterling/The Daily Times
Fullscreen

And when you factor in Wos' willingness to listen to ideas about figures he should incorporate into the mazes he creates, that back-and-forth element gets ratcheted up even more. 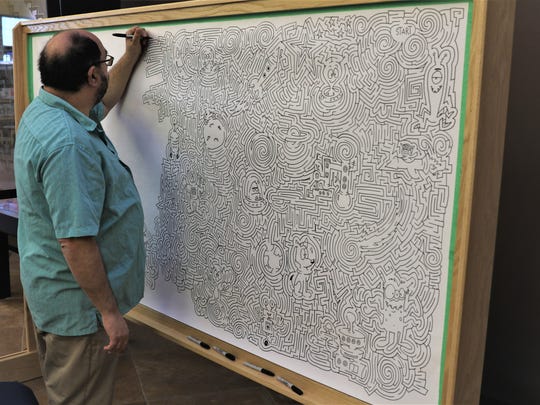 "Suggestions add a whole new level to that interactivity," he said today while working his way through the creation of a maze mural at the Farmington Public Library. By the time the project was finished this afternoon, it took up a space measuring 3 feet, 7 inches by 7 feet, 10 inches.

Such large-scale projects are nothing new for the Pittsburgh-based cartoonist, illustrator, writer, pop culture historian and storyteller. He once crafted a 4-foot-by-36-foot maze — more than 128 square feet — that incorporated more than 100 illustrations. The work reportedly was the largest maze ever created, took six months to complete and now resides in Changzhou, China.

The mural maze Wos was working on today at the library didn't match the scale of that project, but it was enough to impress the crowd of onlookers that gathered to watch him work. Over a half-hour period this morning, Wos made substantial progress on the project even while pausing to answer questions.

Perhaps that's because he gets plenty of practice. Wos creates a new maze every day of the year for the company that syndicates his work to newspapers, then does several dozen more large-scale projects throughout the year, like the one he was creating here. Altogether, he estimated he's been drawing 500 murals a year for the last five years. It's a pursuit he took up at age 7.

"Mazes were very popular back then, but they weren't very challenging," he said. "I've always incorporated illustrations into my mazes, and that made them more difficult."

The maze mural Wos was working on today featured a space theme, complete with rockets, bug-eyed aliens and even a dog wearing a space helmet. 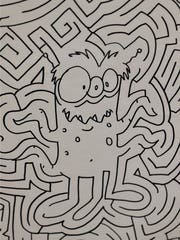 Wos discussed his work in detail and offered tips on others interested in cartooning during a pair of workshops at the library on Monday.

"We had a great turnout," he said. "It's always exciting to me to get to work with kids and adults … It's a great skill to have."

Wos said he advises his students there is right or wrong way to go about cartooning.

"It's about building confidence," he said. "Everybody has their own style. Even if you're drawing and following along with me, your drawing is always going to look different than mine."

Wos said the large mural mazes he does are enjoyable, but they are also challenging.

"It's surprisingly physical," he said. "It's demanding. You're on your knees, and there's a lot of stretching. But I keep it in perspective. My dad was a steelworker for 40 years, nothing I do will ever compare with that."

When asked if he has a favorite among all the maze murals he has created, Wos responded quickly. 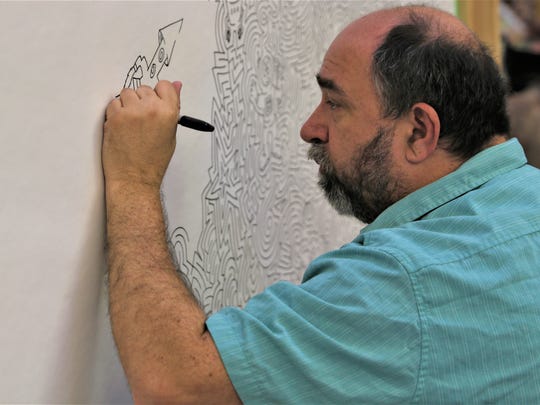 Maze artist Joe Wos draws a rocket ship as part of a maze mural with a space theme that he created Tuesday at the Farmington Public Library. (Photo: Mike Easterling/The Daily Times)

"The next one — always the next one," he said, smiling. "I get better every day. My only regret is, I know a year from now, I could have done better. As an artist, that's just our natural inclination."

More of Wos' work can be seen at mazetoons.com.