The event is a fundraiser for the St. Mary's Youth Group.

An order is assembled in the kitchen Wednesday of the St. Mary's Parish Center during the 20th annual Cheese Enchilada Take-Out fundraiser in Farmington. Mike Easterling/The Daily Times
Fullscreen

A pot of red chile warms on a stove in the kitchen of the St. Mary's Parish Center Wednesday during the 20th annual Cheese Enchilada Take-Out fundraiser. Mike Easterling/The Daily Times
Fullscreen

FARMINGTON — The secret behind the success of the annual Cheese Enchilada Take-Out fundraiser at St. Mary's Parish Center is its simplicity.

"Exactly," youth minister Norm Georgina said today as he took a break from working in the parish center kitchen. "It's all takeout. You roll 'em, shake 'em, cover 'em with chile, and away they go."

The event, now in its 20th year, got underway this morning and ends tonight. Preparations began a couple of weeks ago when volunteers cleaned 320 pounds of red chile, which they cooked on Saturday and Sunday.

Today's sale features the labor of approximately 45 people, more than half of whom are members of the St. Mary's Youth Group, the beneficiary of the event. Proceeds will be used to cover the costs of a youth group mission to Guatemala and travel, attendance and accommodations for a youth conference in Steubenville, Ohio. 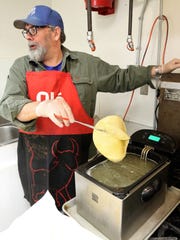 By the time the doors to the sale opened at 9 this morning, 320 gallons of red chile sauce had been prepared, and the enchiladas already were being assembled out of the 600 pounds of shredded cheddar cheese and 900 dozen corn tortillas on hand.

An assembly line process in the parish center kitchen was a model of efficiency. Tortillas were flash fried in oil while pots of red chile simmered, reaching an ideal temperature of 165 degrees. Youth group members gathered around a table in the middle of the room, some patting excess oil from the tortillas while others filled them with cheese, rolling them and placing them in Styrofoam containers a dozen at a time. Red chile was laded over the enchiladas, which were then handed out the kitchen window to fill the orders of customers waiting in the gymnasium.

In another room, a handful of workers filled quart-size plastic bags with red chile, which were sealed and placed in a plastic tub, then taken to the gym for sale.

Parishioners filing out of the St. Mary's Ash Wednesday mass quickly bought 85 orders of enchilada, said Lucy Alvorado, one of the event founders with Millie Howle and Georgina — a trio Howle joking refers to as "the three stooges."

Altogether, approximately 800 orders typically are sold during the event, though Alvorado said there are years when the event is a sell-out.

"It just keeps getting busier and busier," Howle said.

Georgina said the fundraiser now attracts customers from across the Farmington area.

"It's a community thing now," he said. "It just started in our church, but with friends and family in our community, we've gotten it to grow."

The parish center is located just north of the church at 2100 E. 20th St. in Farmington. The sale continues until 7 p.m. 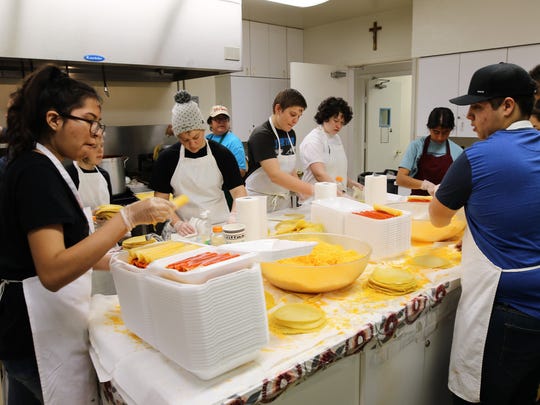