The committee was called to the floor for a vote and adjourned the meeting before hearing from opposition to the bill or taking a vote. 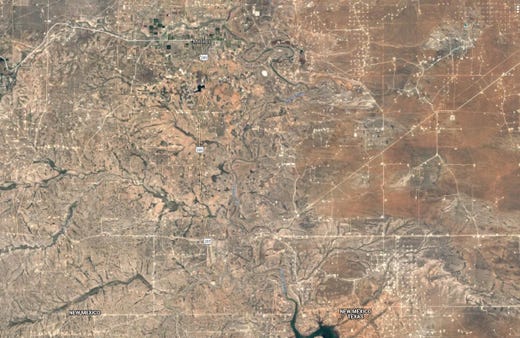 U.S. Highway 285 from the Village of Malaga to the New Mexico/Texas state line. Google maps
Fullscreen 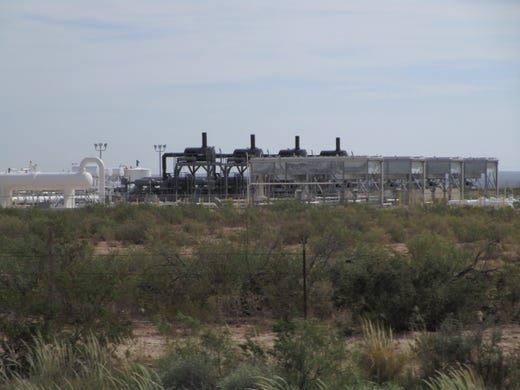 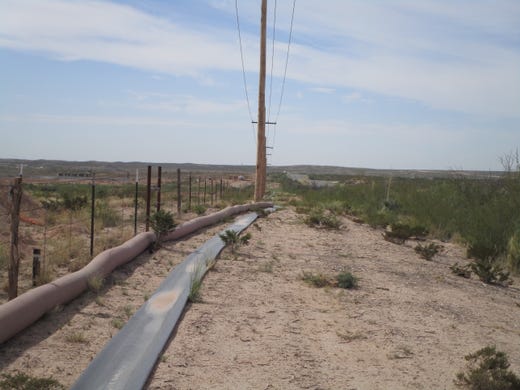 On the east side of U.S. Highway 285 south of Bounds Road construction includes the layout of pipelines and flow lines. Tiffany Owens
Fullscreen 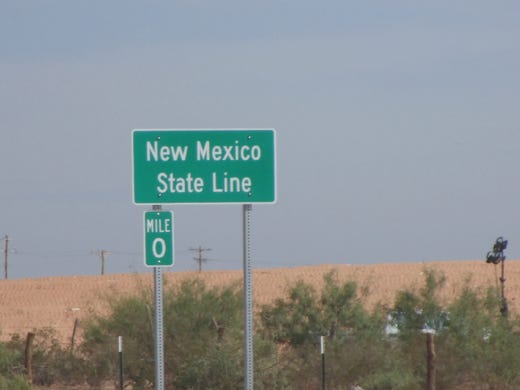 New Mexico and Texas share the Permian and Delaware Basins where the extraction of crude oil has increased in the last year. Tiffany Owens
Fullscreen 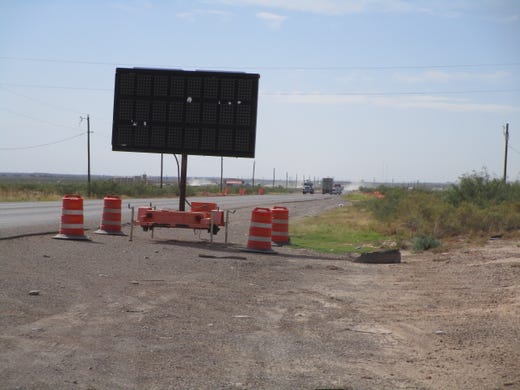 Looking south from the New Mexico/Texas state line at construction and repair work being undertaken by the Texas Department of Transportation. Tiffany Owens
Fullscreen 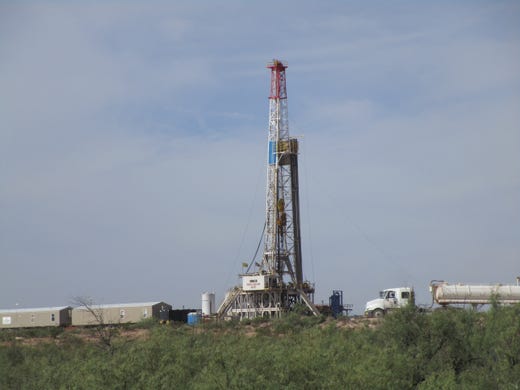 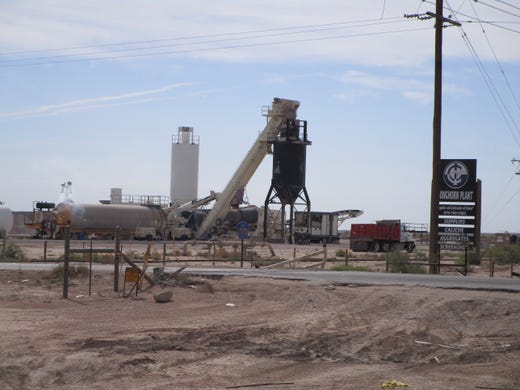 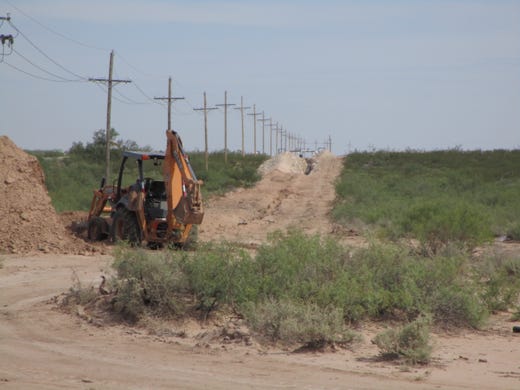 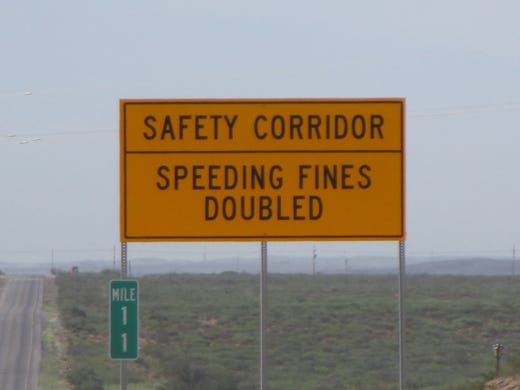 In 2018 a safety corridor was established along the 20-mile stretch of Highway 285 to correct dangerous driving conditions that resulted in numerous accidents and fatalities. Tiffany Owens
Fullscreen 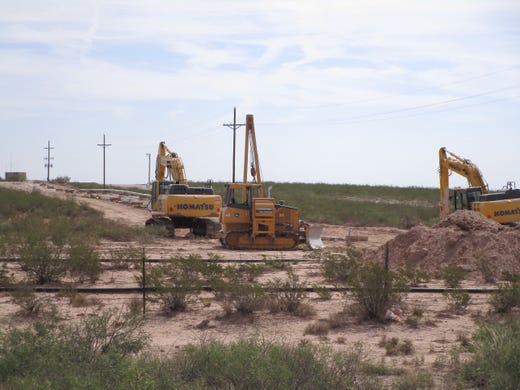 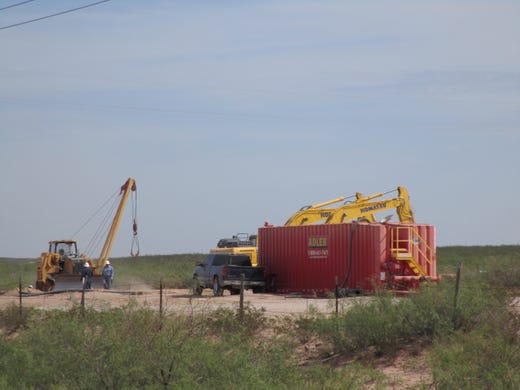 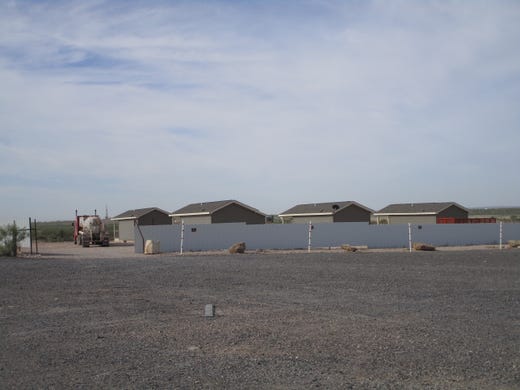 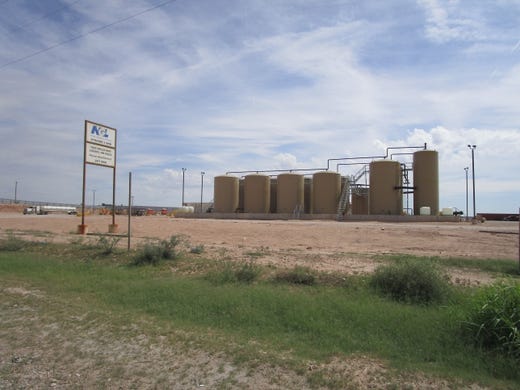 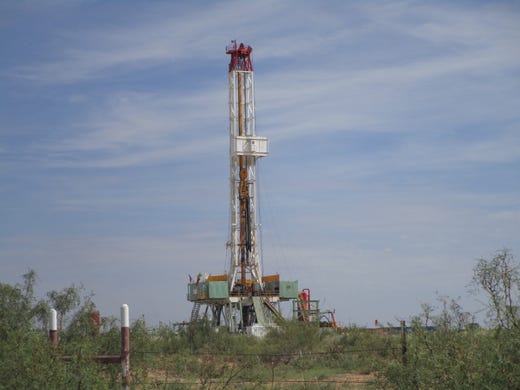 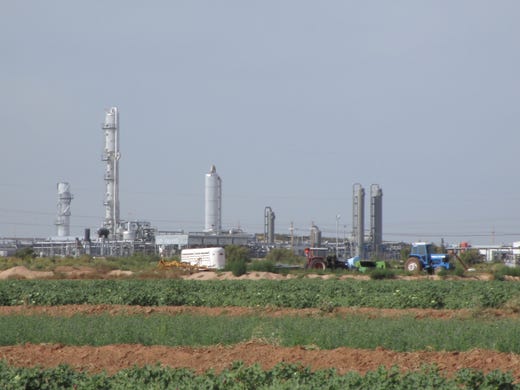 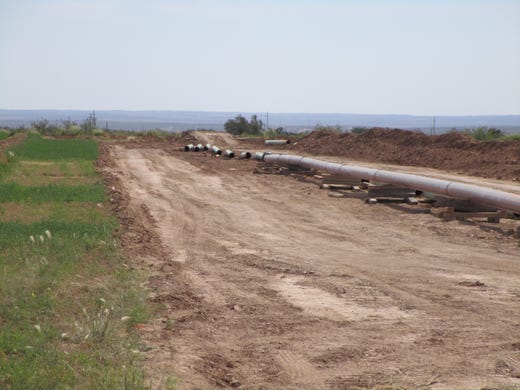 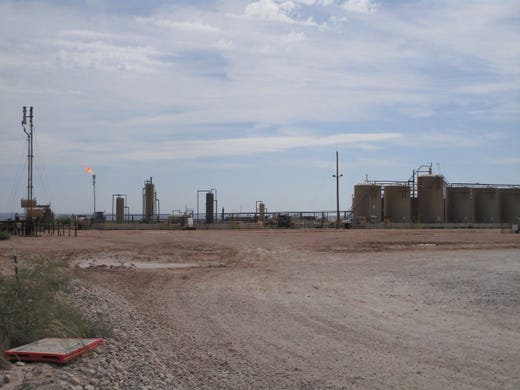 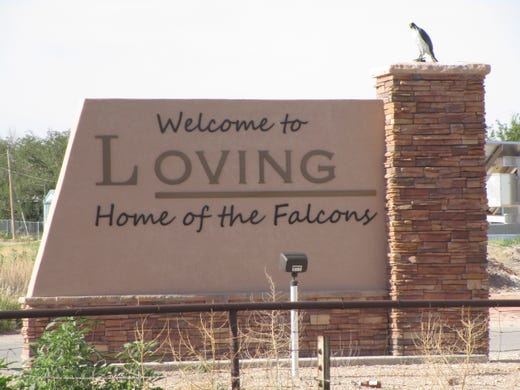 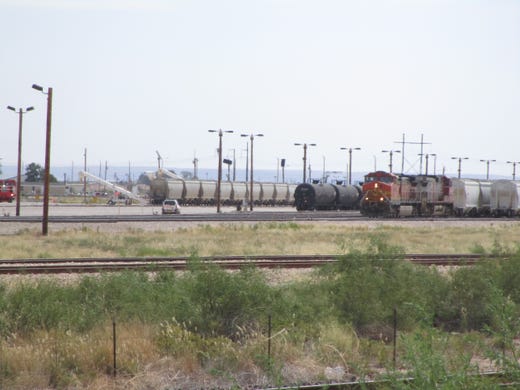 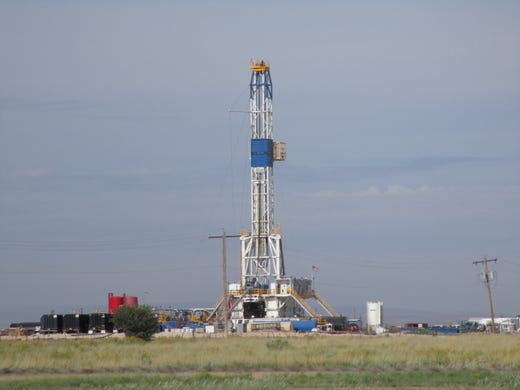 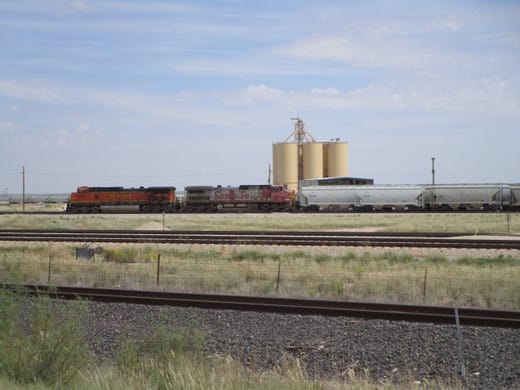 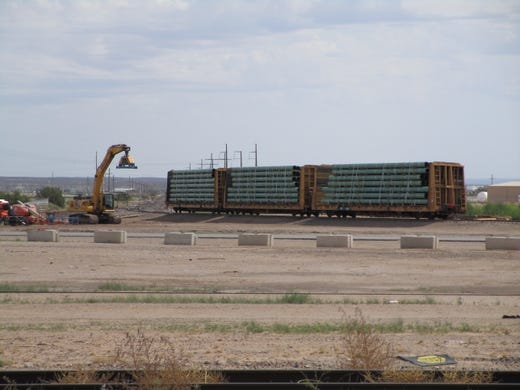 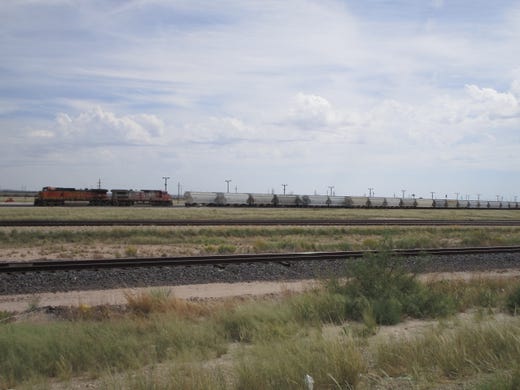 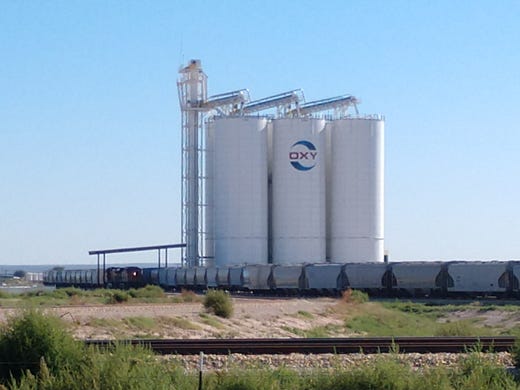 Senate Bill 459 was introduced by Sen. Antoinette Sedillo Lopez (D-16) who said during Tuesday’s hearing in the Senate Conservation Committee that her proposal was not about stopping oil and gas or economic development in New Mexico but preserving the environment for the future.

A recent financial impact report from the New Mexico Legislative Finance Committee estimated the bill would cause the state to lose about $3.5 billion in revenue over the four years of the proposed ban.

The committee was called to the floor for a vote and adjourned the meeting before hearing from opposition to the bill or taking a vote.

Lawmakers will likely reconvene on Thursday for further discussion and to take action on the bill.

It would simply “pause” the practice industry leaders have touted as a cornerstone of the state’s recent boom, Sedillo Lopez said, while lawmakers and scientists can study its impact.

Hydraulic fracturing, a process of pumping water, sand or chemicals underground to break up large shale rock formations so crude oil and natural gas can be extracted, is largely unregulated, she said.

“I propose we place a halt on hydraulic fracturing, so we can learn what kind of impacts it could have,” Sedillo Lopez said. “The oil will still be there. After the halt, we can enact needed regulations.”

Opposition to the move, she said, was driven by industry and its need for higher profits.

“I’ve heard many concerns of the loss revenue, but it is the oil and gas industry that is concerned with its end of the quarter balance,” Sedillo Lopez said. “With oil only trading at $50 per barrel, they need to pump out more to impress shareholders.”

Another issue she said needed to be addressed was water.

More: Oil and gas adapts to drought as extraction grows in the Permian

Hydraulic fracturing typically uses fresh water during the process, resulting in produced water that can be high in chemical and unsafe for drinking.

Sedillo Lopez said the pause could allow the industry time to find better uses for the produced water, other than disposing of it in underground injection wells where the water is pumped back down underground.

Fracking has been the subject of much debate. But before your form an opinion on the subject, first consider the process.

The halt could also allow regulators to find ways to capture more methane and natural gas that is either vented or flared at oil and gas facilities, Sendillo Lopez said, creating more revenue for the State of New Mexico.

She said this would also allow the State to study the health impacts of releasing the gases into the atmosphere.

“We can enact regulations to ensure the methane doesn’t go up in smoke and we get paid for it. We can test our children to see if their precious lungs have been affected by the drilling,” Sedillo Lopez said.

“This can help us learn about actual and potential impacts. Our state regulators can’t even tell us how many of our wells are fracking wells, and how many are traditional. We as the State of New Mexico do not know the effects of hydraulic fracturing.”

Geologist Donald Phillips joined Sedillo Lopez in her presentation, warning lawmakers that the Rio Grande Rift, which runs through the center part of the state along population centers such as Albuquerque and Santa Fe and contains the Rio Grande River – a main supply of drinking water for New Mexico – could be vulnerable to earthquakes caused by hydraulic fracturing.

“This is an active continental rift. It is still forming. It has earthquake potential,” Phillips said. “The Rio Grande River is in the rift because of the rift. Waste water disposal is causing earthquakes in Oklahoma and other places."

Fracturing could also contaminate drinking water, he said, as the fault is in constant motion.

“Essentially, if fracking is allowed in the Albuquerque Basin and is along these faults, it will contaminate the drinking water,” Phillips said. “This is a very active zone. The area in New Mexico that is most prone to earthquakes is in the Rio Grande Rift.”

He said the unique geology in the San Juan Basin to the northwest, and the Permian in the southeast region of New Mexico make it safer for hydraulic fracturing, but earthquakes were reported in the area, and they could spread to Albuquerque if the practice is unregulated.

“Because the Albuquerque Basin is not stable, like the San Juan and Permian is, it is subject to frequent movement. That makes us more vulnerable to earthquakes.

“It’s more about money than people. That leads to environmental injustice. It’s been polluting the water in Texas, Colorado and New Mexico. It’s also an international issue. People around the world will tell you they want to ban it.”

Sen. Benny Shendo (D-22) co-sponsored the bill, he said, because of the danger hydraulic fracturing could pose to lands deemed “culturally-sensitive” by Native American tribes he represents in his district.

Holding back tears, Shendo said the Native way of life must be preserved above profits made by the oil and gas industry. 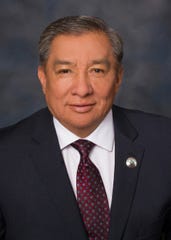 “I know that from the business side, I’m not naive to know that this is important to the state,” Shendo said. “But I have to look out for my district and the people around the San Juan Basin. Our way of life is so important. To try to equate an amount of money to our way of life, you just can’t.

Shendo pointed to Chaco Canyon, where oil and gas development, he said, has already begun encroaching on the natural landmarks in the area and areas of traditional worship for the Navajo Nation in the area.

“When you see the encroachment of drilling, the beauty is affected. It should come as no surprise that I signed on to this bill. At the end of the day, I have to protect my people,” he said. “One of the things that we’ve learned throughout history, you look at the mineral belt, many of those areas still have the legacy waste. Us as Native people are left with that legacy waste that we have to deal with."

The Mescalero Apache tribe journeyed from their reservation in south central New Mexico to the Guadalupe Mountains in Salt Flat, Texas.

SB 459 is not against oil and gas development, Shendo said, but intended to give the State time to truly understand hydraulic fracturing – a practice used by the industry for more than 50 years.

“This isn’t about stopping oil and gas. This is about taking a breath, taking a pause and looking at where we’re headed. We’ve been in this area for thousands of years, and we’ll be here for thousands more.”

More: What were Carlsbad's business leaders promised during their recent trip to Santa Fe?

He said areas culturally-sensitive to Native Americans are mostly in the northern part of the state, but there are also areas closer to the Permian Basin in Carlsbad and Roswell – the region of New Mexico seeing the most industrial growth during the boom.

“We do need a pause, so tribes can look at the impacts to cultural areas. We want to make sure these areas are safe and secure,” Mitchell said. “For us, as Native people, our religion ties us into the landscape.

“Our religion is strong, it's alive. Our religion takes us out into the fields. There are places of traditional worship. These places are under threat because of the development.”