An early-March meeting of city officials, designers and stakeholders in the project is being planned

Meeting planned for early March to discuss specifics of plan

Mick Hesse, a member of the Connie Gotsch Arts Foundation board, talks about the organization's proposal to help fund the construction of an auditorium at the Farmington Museum at Gateway Park to members of the Farmington City Council on Oct. 9 in Farmington. (Photo: Daily Times file photo)

FARMINGTON — A Santa Fe-based design firm has been hired by Farmington officials to create a conceptual plan for the proposed construction of an auditorium and exhibition hall at the Farmington Museum at Gateway Park.

Assistant city manager Julie Baird said a kickoff meeting of city officials, representatives of the firm and stakeholders in the project will be held in early March.

The $55,000 cost of the study will be split by the Connie Gotsch Arts Foundation, the Farmington Museum Foundation and the City of Farmington through the museum foundation, she said. Conron & Woods Architects, a Santa Fe firm that serves public and private clients across the Southwest, has been hired to produce the document. The company specializes in historic preservation, museum and cultural projects.

Baird said she expects the plan will take four to six months to complete, although she would like to see it done sooner. The study will examine what the real costs of the project would be for construction and upkeep of a 200- to 225-seat auditorium that could be used by both the museum for lectures and programs, as well as by community groups for performances and lectures. Conron & Woods representatives also will examine how such an auditorium would fit with the museum's current footprint and whether a logical site for its placement exists.

The conceptual plan also will examine the feasibility of constructing a hall suitable for the display of traveling exhibitions at the museum. Baird said as the museum grows and its needs change, it made sense to consider the proposed new hall as part of that footprint.

Conron & Woods representatives also will be charged with examining other theater spaces in town and how they would compare with an auditorium at the museum in terms of size, level of use and availability of use. Baird said that information would be used to determine whether there is a need for a new auditorium among community groups beyond how the museum might benefit from its presence.

The auditorium initially was proposed by members of the Connie Gotsch Arts Foundation, who approached the City Council in October with an offer of $750,000 for the project. The Farmington-based nonprofit group has handed out $220,000 in grants to various groups for arts projects and is named for Connie Gotsch, the late Farmington author and radio show host who died in 2012. The foundation has asked that the proposed auditorium be named in her honor.

Since it made that proposal to the public, the foundation has secured additional funding commitments for the project from philanthropic arms of Pesco and the Merrion Oil & Gas Corporation. Foundation board member Mick Hesse said both groups have pledged to donate $75,000 each over a three-year period, bringing the total amount of money being offered for the auditorium's construction to $900,000.

Baird said the kickoff meeting has not been scheduled, but she expects it will take place in the first two weeks of March. During that event, the process of completing the study will be mapped out, and other groups and stakeholders that might be interested in participating in the project and helping to fund it will be identified. The meeting will include representatives of the Connie Gotsch Arts Foundation, the museum foundation, city officials and Conron & Woods representatives. 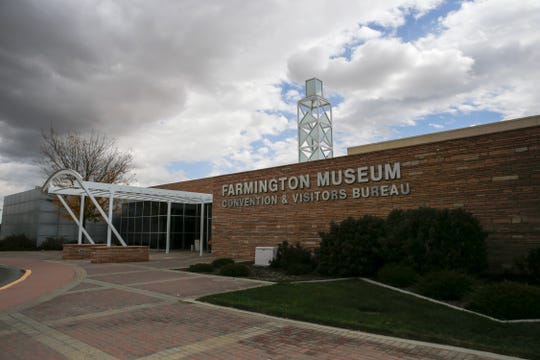 Farmington Museum at Gateway Park is pictured on Wednesday, Oct. 10, 2018. The museum could become the site of a new auditorium. (Photo: Jon Austria/The Daily Times)

Once the study is completed, city officials will review its conclusions and decide whether to proceed.

"If the study finds that a performance hall of this size is needed, and we would get good use out of it, we would be approaching the City Council for its acceptance of the plan, at least, and begin discussing fundraising for its construction," she said.

Baird said she was optimistic that phase of the project could begin by this summer. But she emphasized that, as the museum is a city-owned facility, the decision as to whether to go through with the project would be up to the City Council.

She said the council probably would be more inclined to approve the project if additional entities step forward to support it, especially in a financial sense.

"That helps the City Council see this community's desire for such a space," she said. "So it all goes hand in hand."