The bridge will not be completely closed during construction due to concerns about emergency response times. 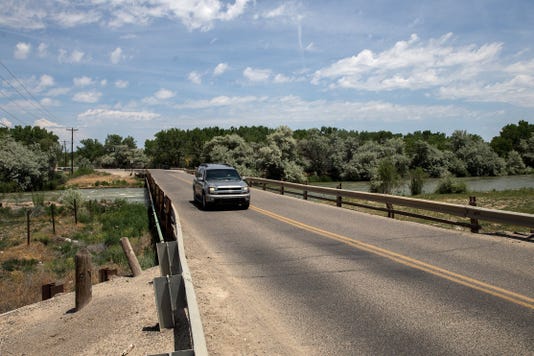 AZTEC — The San Juan County Commission has approved a design to replace a bridge over the San Juan River on County Road 5500 in the Lee Acres area.

The current bridge is in poor condition. The county has reduced it to a single lane and heavy, commercial vehicles are not allowed to cross the bridge.

The commission approved a $5 million bridge that will be made of two unequal spans of prestressed concrete. This bridge will have two lanes that will each be 12 feet wide. The shoulder will be 4 feet wide, and there will be a concrete barrier, a sidewalk and a railing. The entire bridge will be 49 feet wide and will span 205 feet across the river.

The option selected was the least expensive of the four options.

Installation will take about four months

The County Commission voted to install the bridge over four months. During that time, the bridge will have one lane closed. Public Works director Fran Fillerup explained that one side of the current bridge will be destroyed, and the new section will be installed. Then the other side will be replaced.

That will cost $275,000 more and take longer than if the county chose to close the bridge during the construction.

If the county chose to close the bridge, it would have been closed for one month, and work would have taken two months.

San Juan Regional Medical Center emergency response services manager Diane Clark told the County Commission that closing the bridge would increase response time by 18 to 20 minutes for an area that generally receives between 25 and 40 calls each month.

She said about 35 percent of the calls EMS responds to are considered critical incidents. In those incidents, she said, 18 minutes is too long.

County Commission Chairwoman Margaret McDaniel said when she first considered the issue, she thought the county should just close the bridge and get the work done.

"But when you think about it, if it was you or your family member, and you were waiting there and waiting, 18 minutes seems like 18 hours," she said. "And how could we look at somebody and say, 'Oh, we closed the bridge, and we got it done faster. Sorry. Sorry, you know, your family member is in critical condition or didn't make it or whatever because we were in a hurry to get that bridge done.'"

Funding is already in place for the bridge

The county has allocated $5 million of bond funds to the bridge and has also received about $2.4 million of capital outlay money from the state. Any money that is not spent will go back into the county's bond funds for use on other projects.

Installation is expected to take place next summer.