Theater Ensemble Arts will open 'Get Smart' at amphitheater

Theater Ensemble Arts begins a two-week run of its latest production on Thursday.

Theater Ensemble Arts will open 'Get Smart' at amphitheater

Briana Logsdon and R.J. Macsalka are featured in a scene from the Theater Ensemble Arts production of "Get Smart." Mike Easterling/The Daily Times
Fullscreen 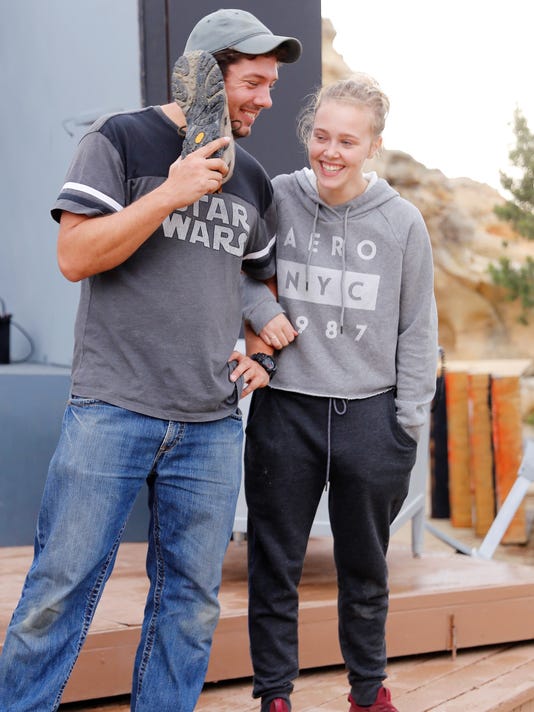 FARMINGTON — When it comes to clandestine technology, the shoe phone may not have worked out to be the most practical idea.

But it seems to still hold a lot of value as a comic device.

That's certainly true within the context of the Theater Ensemble Arts stage production of "Get Smart" that opens Thursday at the Lions Wilderness Park Amphitheater. Director Steve Clark says the stage adaptation of the 1960s TV spy thriller sitcom is updated to a 1980s setting, but it still takes place long before most contemporary devices existed.

"So a guy with a shoe phone still works," he said, referring to the iconic but ridiculous communications device employed by lead character Maxwell Smart. "No one's going to question why it isn't just a smartwatch."

The fact is, there isn't much point in questioning the logic behind much of anything in "Get Smart," which was created for TV by comedy legends Mel Brooks and Buck Henry, and adapted for the stage by Chris Sergel. (A film version starring Steve Carell and Anne Hathaway was released in 2008.) Clark describes the play as being part of the spy thriller genre while at the same time making fun of spy thrillers.

"It moves much more quickly than the TV series," he said. "It's cartoonish, but in a fun way. And the actors have an embellished sense of exaggeration."

Chief among them is the character of Smart, portrayed by Mark Burnham, a largely clueless but earnest U.S. government counter-intelligence agent who battles an international syndicate of evil called KAOS. He is paired with Agent 99, portrayed by Rebekah Cochran, who represents most of the brains and competence in their partnership.

Clark has worked with both actors before – he taught Cochran when she was a high school drama student and he appeared alongside Burnham in last summer's TEA production of "The Three Musketeers" at the amphitheater.

"I think he does a very good job of capturing the spirit of Max," Clark said of Burnham before going on to describe the Smart character in more detail. "He's a bit of a buffoon and a bumbler, but he's successful because he's pure of heart. Evil simply cannot defeat him. He's got a lot of bravado. He doesn't necessarily know how incompetent he can be. He's resilient, and he thinks he's going to do great."

Most of the laughs in "Get Smart" spring from Smart's lack of self-awareness. Cochran's Agent 99 necessarily serves as straight man to Smart's goofy hero, but Clark describes his former student as anything but an afterthought.

"We've worked a lot together — we've even done some shorts films as actors, as well. I think she's going to be a big Hollywood star one day."

Clark directed the TEA production of "Deathtrap" in January 2016, and he acknowledged that directing a broad comedy like "Get Smart" is a much different enterprise than the former was, though he has enjoyed both experiences.

"Doing a murder thriller was a lot of fun for me," he said. "I tend to like things that involve the irrational and macabre. But doing something a little lighter can be enjoyable for me."

Clark said he loved the "Get Smart" TV series and found himself drawn to James Bond movies as a child, as well all the secrecy, gimmicks and gadgetry that went along with both. When the time came for the TEA play selection committee to choose a play for its annual production in the spacious confines of the amphitheater, Clark presented them with the "Get Smart" script, thinking its physical brand of comedy would work well in that setting.

"It's a lot of space," he said, explaining that the amphitheater works best as a venue for large-cast, action-oriented plays like "The Three Musketeers" and "Get Smart." "You wouldn't want to do a play with four people sitting at a dining room table."

Clark's cast features nearly two dozen actors of all ages and experience levels. In one respect, he turned the usual casting approach on its head for this production, giving many of the more prominent roles to the least-experienced actors and sliding the more seasoned performers into supporting roles.