Fresh off Hollywood gig, Signal 99 returns to Shiprock this weekend 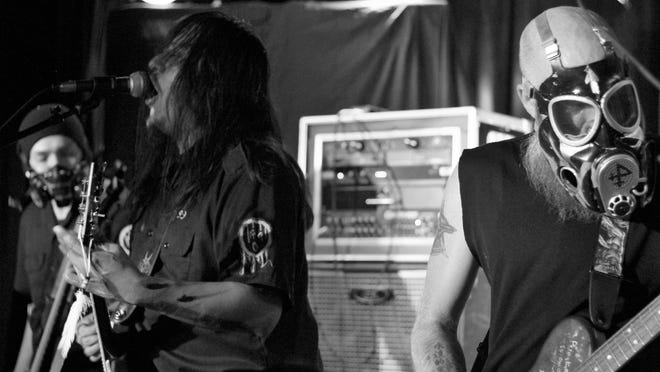 FARMINGTON — While hiking up the fabled Pyramid of the Sun in Teotihuacan outside Mexico City one day last May, Chuck Haven paused to rest and turned to look at how far he'd come.

It took him only a moment to realize the climb, and the view, had symbolic as well as literal significance for him.

"It was such a spiritual experience," he said. " … When you're climbing, it seems like you're not climbing very far. But then you stop and catch your breath. I was out of breath and tired, but I was determined to get to the top."

Haven, the founder and frontman for the local metal band Signal 99, eventually finished his climb and marveled at what he saw. While he was soaking up the view, he had time to reflect on how similar his hike was to the journey his band has undergone over the past several years. Haven is the first to acknowledge Signal 99 isn't close to reaching the top of the music business pyramid, but it's a whole lot further up the slope than it was three years ago.

"There are several plateaus we've hit, and at one time, we were even going downhill," he said by phone Thursday as his band prepares for a show Saturday night in its hometown of Shiprock. " … Now it seems like we're still climbing. But it's a good feeling. We may never get to the top, but I think we've climbed a lot higher than we expected from ourselves."

The group continues to experience new highs, traveling to Mexico twice in the last year to perform; headlining a music festival in California in front of approximately 20,000 fans; playing a June show in Las Vegas, Nevada; signing a deal with the indie record label Dead Sea Records, and attracting sponsorship deals for everything from music equipment to clothing.

All that has been a challenge for Haven to absorb.

"I still see us as small-town boys, still playing backyard shows like we did when we started out," he said.

But those days are long gone. Signal 99 took the stage Sunday at the world-famous Viper Room rock club on the Sunset Strip in Hollywood as the opening act for the nationally touring group Dope. An enthusiastic, sellout crowd greeted the band, which was making its second appearance on Sunset Strip after performing a show in 2016 just down the street at the equally well-known Whisky a Go-Go.

Haven was still basking in the glow of the Viper Room show today while talking about the club's well-known history. Actor Johnny Depp was one of the original owners, while fellow actor River Phoenix died of an overdose there. Since opening in 1993, its stage has welcomed the likes of Tom Petty and the Heartbreakers, Bruce Springsteen, Johnny Cash, Green Day, Sheryl Crow, Oasis, Courtney Love, Everclear, Iggy Pop, the Black Crowes and Lenny Kravitz.

Haven was understandably pleased to find his band occupying the same real estate artists of that stature once did, and he said the experience of performing in the club was everything he imagined it would be.

"It's not a very big venue, but it's an awesome place, and the people who run it were really nice," he said. "And the sound was great – it was one of the best-sounding (venues) we've been to. It was a great experience."

The West Coast trip could have been even more memorable for the band if not for a scheduling conflict. Haven said Signal 99 was offered a headlining gig the following night at the Whisky but had to decline because one member of the band had to be back at work the next day.

Even so, those kinds of opportunities are becoming more and more common for Signal 99, which is still promoting its 2017 release "American Monster." Its show in Shiprock on Saturday will be its first appearance in its hometown in approximately 16 months, and Haven is excited about seeing some friendly faces and perhaps laying the groundwork for more local shows in the future.

"Since there are not too many venues in the area now, I said, 'Let's try Shiprock and see how that goes,'" he said. "If everything goes well, we might be bringing in more bands, possibly more California bands and more national acts."

But that performance could be Signal 99's last show for some time. Haven is intent on writing and polishing the material for the band's next album, which he hopes to release by late fall. That means he finds himself in the unusual position of having to turn down gigs to make time to indulge in that creative process.

"I, for one, don't like to turn down gigs, but I've got to think about putting new material out there," he said. " … We need to make time for ourselves to finish."

Haven said the material on the new release will be considerably brighter than the dark tone of "American Monster," in large part because of the memorable experiences the group has had on the road over the last year.

"A lot of the music is upbeat with faster tempos," he said. "We've been meeting other people and going to other countries. It really deals with how important it is to remain positive and how there's a lot more to life than we were expecting."

Signal 99 headlines a four-band lineup that includes Taipan, Condemn the World and Wedding is Off on Saturday at the MOD in Shiprock. Doors for the show open at 7, with the music starting at 7:15 p.m. Admission is $5.