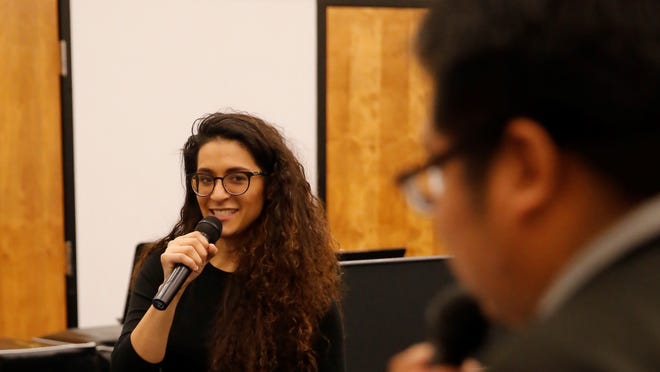 FARMINGTON — It didn't take long for Delbert Anderson and Tuen Fetz to establish a rapport once the latter arrived here in 2015 to become the director of instrumental music at San Juan College.

Anderson was already was an adjunct faculty member at the college, in addition to fronting his own highly successful jazz band that regularly performs all around the country. He found that he and Fetz were of the same mind when it came to many things.

Naturally, that led to some thoughts of finding more opportunities to work together. Recognizing Anderson's strength as a jazz trumpeter and arranger, Fetz wanted him to take on a greater role in leading the college's jazz combo. Anderson quickly accepted.

But Anderson was less sure when Fetz approached him last year about joining him in forming a New Orleans-style band that would perform a local show each year in celebration of Mardi Gras. Anderson had so little exposure to that kind of music, he explained, that he actually questioned its existence.

"I didn't really think it was a thing," Anderson said, laughing.

Fetz responded by sending Anderson digital copies of some material he wanted the band to perform, songs by the likes of such New Orleans-area legends as Dr. John, the Wild Tchoupitoulas, the Dixie Cups, the Rebirth Brass Band and Professor Longhair. Anderson quickly warmed to the music, and the band Funkified was born.

"It's fun music that feels good and grooves really hard, but it has a funk emphasis," Fetz said, describing the style.

Funkified is Fetz's second go-round at leading a New Orleans-style pop band. During his previous career stop as a faculty member at Eastern Oregon University in La Grande, Oregon, he had put together a band in that genre called the Depot Street Syncopaters that wound up playing together for seven years. Fetz said he enjoyed that experience and was interested in duplicating it here.

"When I moved here, I missed that group a lot," he said. "And I thought this would be a unique musical style for Farmington."

Fetz and Anderson recruited several other members. The group made its debut during Mardi Gras last year at Clancy's, playing to a full house and generating a positive buzz. The other members of Funkified are also music educators, classical musicians or highly regarded veterans of the local music scene, but Fetz — who plays drums and sings — believes playing in this band offers them something they can't experience elsewhere.

"I think they find the music to be enjoyable and fun and a good time," he said. "This is music they don't play every day. It's a divergence from what they normally do. There's nothing about it that's old hat."

Anderson, the group's trumpet player, acknowledged the differences in playing for Funkified and leading his own band.

"I actually enjoy playing some background music, but the biggest thing I love about this band is the soloing aspect," he said. " … I love improvising, so that's what I mainly do. … And I definitely like not having to carry the melody so often."

Funkified's set list is meant to evoke a party atmosphere, and the group will open Saturday's show by strutting into the club while performing "When the Saints Go Marching In." Fetz said this is definitely not a sit-on-your-hands kind of music for the audience, even if listeners aren't familiar with the style.

"They were really enthusiastic," Fetz said of last year's crowd. "It was a great audience, and I thought it was good for Clancy's. At one point, there was a line out the door, and there was a 45-minute wait for a table."

Saturday's show will be only its second performance, although Fetz hopes to secure more regular bookings for the group in the future.

"This is Mardi Gras music, but that doesn't mean it can't be played on other dates besides Mardi Gras," he said.