Lee Acres bridge could be reduced to single lane

The bridge’s weight limit has been reduced and the county has requested $5 million of capital outlay funds through local legislators to replace the bridge.

Lee Acres bridge could be reduced to single lane

County Commission may vote on issue during Tuesday meeting 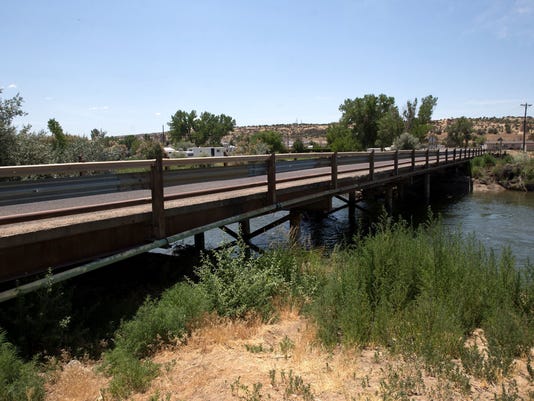 The San Juan County Commission is expected to decide during its meeting on Tuesday whether to limit traffic on this County Road 5500 bridge over the San Juan River to a single lane.(Photo: Daily Times file photo)

FARMINGTON — The San Juan County Commission will consider reducing the number of lanes on the bridge over the San Juan River on County Road 5500 in Lee Acres.

The bridge’s weight limit has been reduced, and the county has requested $5 million of capital outlay funds through local legislators to replace it.

The County Commission likely will decide at 4 p.m. Tuesday whether to reduce the bridge to a single lane until it is replaced. The commission meets in the administration building at 200 S. Oliver Drive in Aztec.

County Public Works director Fran Fillerup said the lane reduction is needed because it has been hard to keep commercial vehicles off the aging bridge. He said the reduction also will slow the speed of traffic.

The bridge was built in the 1970s by nearby residents, and its condition has deteriorated over the years. Fillerup said design is underway for the bridge replacement, but construction will likely not start this year.

The County Commission also likely will approve an agreement with the New Mexico Department of Transportation to construct a walking path for Kirtland schools. Fillerup said the county hopes to have the project completed by the start of school in the fall.

The County Commission also will hear a presentation about the fiscal year 2017 audit.

It also will have a closed executive session at the end of the meeting to discuss joining a lawsuit that relates to opioid drugs.

The San Juan College board will meet at 7 p.m. Tuesday in the board room in the Educational Services Center on campus. The board will consider a “change in scope” regarding the STEM-H project, a $5.4 million renovation and expansion of the college’s School of Science, Math and Engineering that the board approved in January 2017. The meeting is open to the public.