Retro and mod, distinct but complementary

A new exhibition by Farmington artists Robb Rocket and Roswell has opened at San Juan College.

Retro and mod, distinct but complementary

"Rockin Scoob" by Robb Rocket is based on a pen-and-ink drawing the artist had completed for his "Bone Yard" series. Mike Easterling/The Daily Times
Fullscreen

Roswell says her work is becoming larger in scale, and she has developed a newfound fascination with woodworking. Mike Easterling
Fullscreen

Robb Rocket points to one of his pieces in "The Bone Yard" series of pen-and-ink drawings. Mike Easterling/The Daily Times
Fullscreen

Farmington artist Robb Rocket has added 30 pieces to a series of pen-and-ink drawings he refers to collectively as "The Bone Yard" for his new show at San Juan College. Mike Easterling
Fullscreen

The work of Robb Rocket and Roswell is featured in a new exhibition this month at the Henderson Fine Arts Center Art Gallery at San Juan College. Mike Easterling
Fullscreen

FARMINGTON — Robb Rocket and Roswell each produce plenty of artwork good enough to stand on its own in a solo exhibition.

And over the past several years, they both have had their work featured that way often. In fact, they say, they've probably done more shows separately than together.

But it is when the Farmington husband-and-wife team shows its work together — as it is doing in its new exhibition "The Retro Mod Show featuring Robb Rocket & Roswell" at the Henderson Fine Arts Center Gallery on the San Juan College campus — that the complementary nature of their styles elevates their art to a plane that neither might have achieved alone.

"We work in different styles but in the same era and with the same inspirations," said Roswell, otherwise known as Tina Marie Farrow, a New Mexico native who took her artistic name from the town in the southeast corner of the state where she was born.

Those inspirations — derived largely from pop culture and the Space Age — pepper their brightly colored work, sometimes giving the viewer the feeling that the two are sharing a private joke or, at least, expressing a fascination for the same obscure, middle 20th century points of reference. Yet their individual styles are distinctive, bold and evolving, even as their work fits together seamlessly when seen side by side. 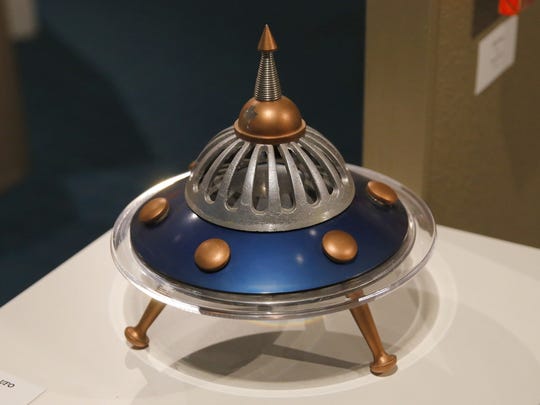 Both artists, in fact, are in the habit of tinkering with some of their work even after its been displayed publicly. Rocket likes to show a series of several dozen pen-and-ink drawings, collectively known as "The Bone Yard," that grows over time. Since he displayed it in a 2015 show at Crash Music at the Aztec Theater, he has added 30 pieces to it, each of which will be featured in this show.

Those drawings are intended to serve as the skeleton for more fully realized paintings, and Rocket goes that extra yard with his piece "Rockin Scoob," which features well-known characters from the "Scooby-Doo" franchise. Rocket enlarged his original drawing, added colored marker and pencil, and superimposed it on a background photo before topping it with a resin finish.

"I think it takes it to a different level," he said.

"Rockin Scoob" is the first work on which he has employed that style, but he was pleased enough with the results to plan to do it again.

"Rockin Scoob" by Robb Rocket is based on a pen-and-ink drawing the artist had completed for his "Bone Yard" series. (Photo: Mike Easterling/The Daily Times)

"I wasn't sure how to make it look like a finished work," he said, explaining his decision to add the resin finish was an experiment that paid dividends. "It came out very nice."

Roswell has number of new pieces in the show, as well. Her "Orbital 2" piece reflects her newfound interest in woodwork, though her three-dimensional, multi-media, abstract work continues to be largely influenced by the Googie style she picked up after finding traditional approaches to art too restrictive. In fact, much of her recent work features shiny elements that reflect the resin finish of that woodwork.

"I just get more and more ideas as I go along," she said, describing how her work has changed in recent years. "I have fun doing it, and that leads me to more ideas." 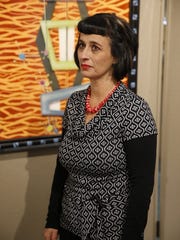 Roswell says her work is becoming larger in scale, and she has developed a newfound fascination with woodworking. (Photo: Mike Easterling)

The scale of her work has changed, too, with many of her new works taking up several square feet of wall space. She smiled as she examined how the gallery staff had hung one of her multi-part pieces in a fashion she had never envisioned, giving it a look that surprised and delighted her.

That reaction is something both artists hope to elicit from their viewers. They acknowledge the fact that working in contemporary, untraditional styles in a community that has little experience with that kind of work may limit their commercial viability. But they both have the sense that there is a growing appreciation for untraditional work in the Four Corners area.

"I think so," Roswell said. "I think a lot of local artists have stepped out of their comfort zone and are trying new ideas. There's a lot more modern art and contemporary art popping up in the area. There's a lot more variety in some of the recent shows." 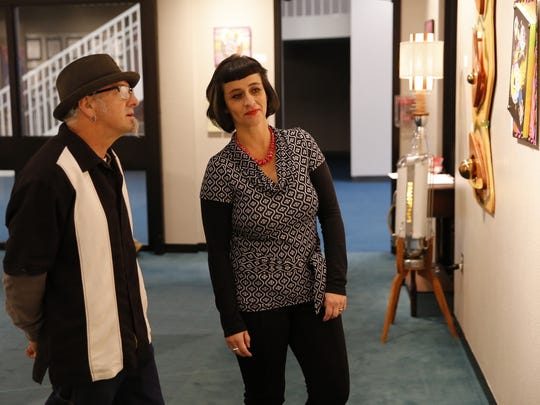 The work of Robb Rocket and Roswell is featured in a new exhibition this month at the Henderson Fine Arts Center Art Gallery at San Juan College. (Photo: Mike Easterling)

Rocket hopes he and Roswell have been part of that movement.

"I'd like to think we have," he said, hastening to explain he wasn't trying to take credit for anyone else's success. "I've noticed a lot more art that is done in our style. There's more variety, and I think that, in a way we might have had something to do with that."

The two have launched their own online gallery at retromodstudio.com, and they continue to entertain plans of opening a home studio where they feature the work of other artists in addition to their own. With some signs pointing to the fact that the local economy may have bottomed out last year, they are cautiously optimistic that the local art sales market may be in for a rebound.

Rocket said he'd gotten an indication of that while attending the Rio Grande Arts & Crafts Festival in Albuquerque earlier this year.

"What we did notice was a lot of people walking out with art under their arm," he said. "I think that will find its way here, as well."

Even if it doesn't, he and Roswell have no plans to change their approach.

"Our first rule is, we do it for fun," he said. "We take our business part seriously, but if you're not having fun, it's not art."

Farmington artist Robb Rocket has added 30 pieces to a series of pen-and-ink drawings he refers to collectively as "The Bone Yard" for his new show at San Juan College. (Photo: Mike Easterling)