Drought conditions developed over the past few months 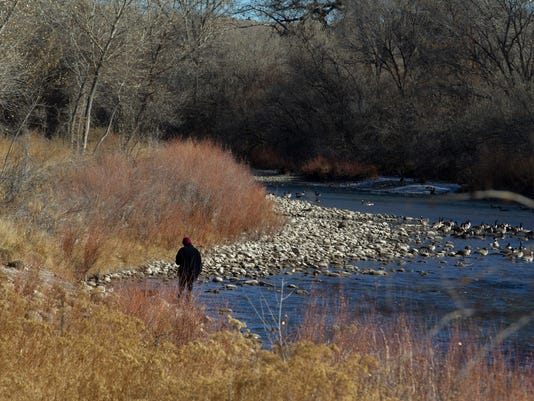 Water flows through the Animas River on Wednesday at Berg Park in Farmington. Sparse snowpacks in the mountains and a lack of precipitation have officially caused a drought in most of San Juan County.(Photo: Jon Austria/The Daily Times)Buy Photo

FARMINGTON — San Juan County has seen a return of drought conditions over the past few months, according to the U.S. Drought Monitor compiled by the University of Nebraska Lincoln.

Currently, the majority of the county is experiencing a moderate drought.

A drought is a prolonged period of low precipitation resulting in a shortage of water. The University of Nebraska Lincoln tracks drought conditions across the country and publishes weekly updates online at droughtmonitor.unl.edu.

Read: Not white, but warm Christmas forecast in trend that may last the holiday season

According to the National Weather Service, Farmington has received less than half an inch of precipitation since the beginning of October.

San Juan County was not experiencing drought conditions in September and only the southwest corner of the county was considered abnormally dry, according to the U.S. Drought Monitor.

The Arctic is warming faster than it has in 1,500 years 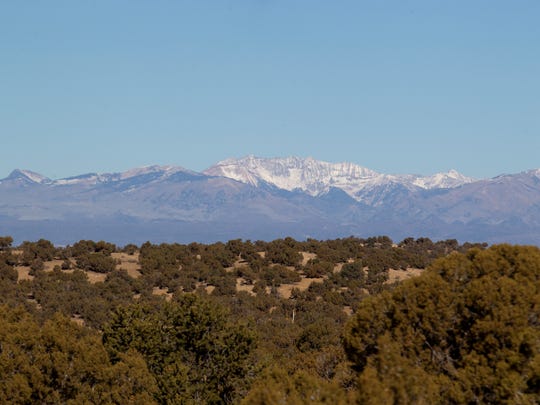 According to the U.S. Department of Agriculture Natural Resource Conservation Service, the Dolores, San Juan, Animas and San Miguel basins in Colorado have 25 percent of their normal snowpack as of Tuesday. The snowpack from the river basins in Colorado feeds the rivers that run through San Juan County. 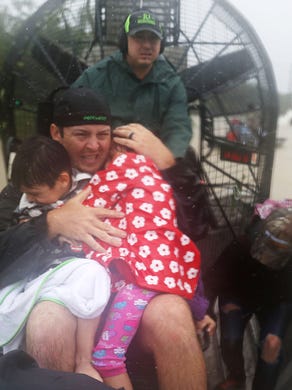 Extreme weather events have lead the headlines throughout 2017. Dean Mize holds children as he and Jason Legnon use an airboat to rescue people from homes that are inundated with flooding from Hurricane Harvey on Aug. 28, 2017, in Houston, Texas. Joe Raedle, Getty Images
Fullscreen

Coffins that were washed downhill from the Lares Municipal Cemetery by a landslide are seen in the aftermath of Hurricane Maria in Lares, Puerto Rico, on Sept. 30, 2017. Ricardo Arduengo, AFP/Getty Images
Fullscreen

Ben Pederson find's a school yearbook in the remains of his bedroom after his family's home was destroyed by wildfire in Santa Rosa, Calif. The death toll from some of California's worst ever wildfires rose to 17 as thousands of firefighters battled to bring the infernos under control. The fires which have devastated California's wine country are already among the deadliest ever in the western US state and officials warned they expect the toll to go up. Robyn Beck, AFP/Getty Images
Fullscreen

A home totally engulfed in flames from the Thomas fire at the corner of N. Fir and Buena Vista Street at 1:30 a.m. in Ventura County, Calif. Chuck Kirman, The Star/USA TODAY Network
Fullscreen

On Oct. 12, 2017, hundreds of people were missing in massive wildfires which have swept through California killing at least 26 people and damaging thousands of homes, businesses and other buildings. This aerial view shows burned properties in Santa Rosa, Calif. Josh Edelson, AFP/Getty Images
Fullscreen

A San Diego Cal Fire firefighter monitors a flare up on a the head of a wildfire (the Southern LNU Complex), off of High Road above the Sonoma Valley, in Sonoma, Calif. A wind shift caused flames to move quickly up hill and threaten homes in the area. Three days after the fires began, firefighters were still unable to gain control of the blazes that had turned entire Northern California neighborhoods to ash and destroyed thousands of homes and businesses. Kent Porter, AP
Fullscreen

Tracey Morgan, left, consoles Monica McCarty, who lost her father and son when a tornado hit the trailer camp all were staying at in Hattiesburg, Miss., early Jan. 21, 2017. All three were in different trailers when the storm hit. The tornado was part of a wall of stormy weather traveling across the region, bringing with it rain and unstable conditions. Rogelio V. Solis, AP
Fullscreen

Donna Thompson, and a friend, salvage some of her possessions Jan. 21, 2017, after a morning tornado ripped her roof off in Hattiesburg, Miss. Rogelio V. Solis, AP
Fullscreen

Flood water crosses over Interstate 5 at Williams backing up traffic in both north and southbound lanes for hours on Feb. 18, 2017, in Williams, Calif. Northern California and the San Francisco Bay Area were facing a weekend return of heavy rain and winds that lashed them earlier in the week before the storm moves out. Randy Pench, AP
Fullscreen 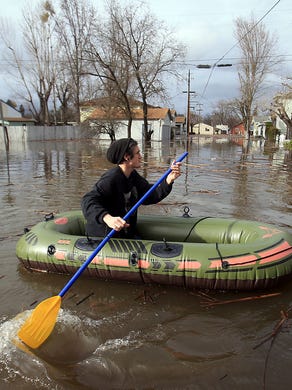 Bruce Alden of Lakeport, paddles his way across Esplanade Street to get some waders from friends in a flood, Feb. 21, 2017, in Lakeport, Calif. Kent Porter, AP
Fullscreen

A drone photo shows sections of the roof were peeled off on the Bayside hotel Sept. 13, 2017, in Key West, Fla., after Hurricane Irma. Rodney White, Michael Zamora, The Register/USATODAY Network
Fullscreen

Nora Martinez carries her possessions out of a house she shared with two other people after a tornado destroyed the residence, Jan. 21, 2017 in Hattiesburg, Miss. Rogelio V. Solis, AP
Fullscreen

Cody Poole climbs out of a window in his familys severely damaged home in Petal, Mis., after looking for clothing. Poole says thats also how he and family members exited the home following a predawn tornado, Jan., 21, 2017. Petal Mayor Hal Marx says more than 300 homes were damaged along with hundreds more in its larger neighbor of Hattiesburg. The twister plowed a 25-mile path across south Mississippi, killing four people and injuring dozens. Jeff Amy, AP
Fullscreen

An open kitchen littered with roofing and ceiling debris show the strength of the tornado that hit this south Mississippi community in Hattiesburg, Miss., Saturday, Jan. 21, 2017. The tornado was part of a wall of stormy weather traveling across the region, bringing with it rain and unstable conditions. (AP Photo/Rogelio V. Solis) ORG XMIT: MSRS113 Rogelio V. Solis, AP
Fullscreen

Volunteer rescuer workers help a woman from her home that was inundated with the flooding of Hurricane Harvey in Port Arthur, Texas. Joe Raedle, Getty Images
Fullscreen

Aaron Tobias who said he lost everything stands in what is left of his home after Hurricane Harvey blew in and destroyed most of the house on Aug. 26, 2017 in Rockport, Texas. Mr. Tobias said he was able to get his wife and kids out before the storm arrived but he stayed there and rode it out. Joe Raedle, Getty Images
Fullscreen

Members of the U.S. Army 1st Special Forces Command and volunteers deliver boxes of M.R.E's and water up a makeshift ladder to people that were cut off after the bridge collapsed in the wake of the devastation left across the island by Hurricane Maria in Utuado, Puerto Rico. The neighborhood was cut off from help for about two weeks after the Category 4 hurricane passed through. Joe Raedle, Getty Images
Fullscreen

Larry Koser Jr., left, and his son Matthew look for important papers and heirlooms inside Larry Koser Sr.'s house after it was flooded by heavy rains from Hurricane Harvey in the Bear Creek neighborhood of west Houston, Texas. The neighborhood flooded after water was release from nearby Addicks Reservoir. Erich Schlegel, Getty Images
Fullscreen

Several homes, seen from above from a drone, were destroyed by Hurricane Maria in Naranjito in Puerto Rico. Ricky Flores Carrie Cochran/USA TODAY Network
Fullscreen

Fabian Robles, from left, Javier Robles, Caleb Maysonet, and Joe Maysonet drink and fill up large trash cans with water from a drainage pipe off Highway 149, connecting Manati to Cialés. The men and numerous other residents form lines at the mountain drainage pipes each day to take back to their communities where most are still without water and power three weeks after Hurricane Maria. Alton Strupp, The Courier-Journal, via USA TODAY Network
Fullscreen

Destruction in the aftermath of Hurricane Maria in Puerto Rico is seen on Sept. 23, 2017. Puerto Rican government is reporting that much of the island is still without power and access to drinking water on 06 October 2017. EPA-EFE/Kris Grogan HANDOUT HANDOUT EDITORIAL USE ONLY/NO SALES ORG XMIT: CBP Kris Grogan , EPA-EFE
Fullscreen

A firefighter carries a woman from her car after it was caught in street flooding as a powerful storm moves across Southern California in Sun Valley, Calif. After years of severe drought, heavy winter rains have come to the state, and with them, the issuance of flash flood watches in Santa Barbara, Ventura and Los Angeles counties, and the evacuation of hundreds of residents from Duarte, California for fear of flash flooding from areas denuded by a wildfire last year. David McNew, Getty Images
Fullscreen

A fireman walks past a totally engulfed burning home at the corner of N. Fir and Buena Vista Street in Ventura County. Chuck Kirman, The Star, USATODAY Network
Fullscreen

Heather Tiffee looks through the remains of her parents' home after it was destroyed by the Atlas Fire in Napa, Calif. At least thirty one people have died in wildfires that have burned tens of thousands of acres and destroyed over 3,500 homes and businesses in several Northern California counties. Justin Sullivan, Getty Images
Fullscreen

A resident rushes to save his home as an out of control wildfire moves through the area on October 9, 2017 in Glen Ellen, Calif. Justin Sullivan, Getty Images
Fullscreen

People look through the rubble of a home that was destroyed by the Tubbs fire in the Larkfield-Wikiup neighborhood in Santa Rosa, Calif. Jay Caldreron and Richard Lui/USATODAY Network
Fullscreen 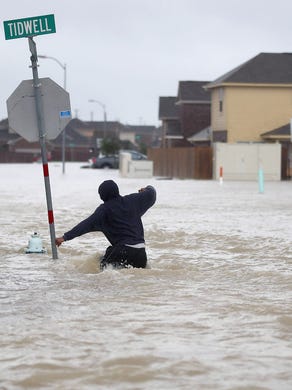 A person walks through a flooded street with a dog after the area was inundated with flooding from Hurricane Harvey on August 28, 2017 in Houston, Texas. Joe Raedle, Getty Images
Fullscreen

People sit in their apartment after the window was blown out by the winds of Hurricane Maria as it passed through the area in San Juan Puerto Rico. Joe Raedle, Getty Images
Fullscreen 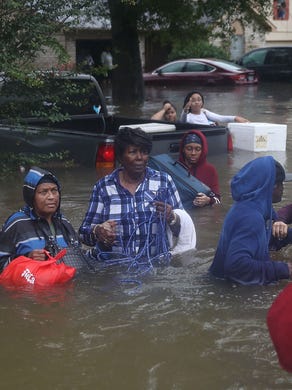 People walk down a flooded street as they evacuate their homes after the area was inundated with flooding from Hurricane Harvey in Houston, Texas. Joe Raedle, Getty Images
Fullscreen

Donna Raney makes her way out of the wreckage of her home as Daisy Graham tells her she will help her out of the window after Hurricane Harvey destroyed the apartment in Rockport, Texas. Donna was hiding in the shower after the roof blew off and the walls of her home caved in by the winds of Hurricane Harvey. Joe Raedle, Getty Images
Fullscreen

Firefighting helicopters try to save a house from the Thomas wildfire in Carpinteria, Calif. on Dec. 10, 2017. The Thomas fire is only 15 percent contained, now threatening the city of Santa Barbara and the nearby coastal town of Carpinteria, making it one of the worst wildfires in California history. AFP Contributor#AFP
Fullscreen