Trump issued a proclamation reducing the size of Bears Ears National Monument and turning it into two separate national monuments.

President Donald Trump holds up a signed proclamation to shrink the size of Bears Ears and Grand Staircase Escalante national monuments at the Utah State Capitol Monday, Dec. 4, 2017, in Salt Lake City. Trump traveled to Salt Lake City to announce plans to shrink two sprawling national monuments in Utah in a move that will delight the state's GOP politicians and many rural residents who see the lands as prime examples of federal overreach, but will enrage tribes and environmentalist groups who vow to immediately sue to preserve the monuments.(Photo: Rick Bowmer/AP Photo)

The Navajo Nation will join the other members of the Bears Ears Inter-Tribal Coalition — the Hopi, Uintah and Ouray Ute, Ute Mountain Ute, and Zuni tribes — in a lawsuit against the president.

In a statement, Navajo Nation President Russell Begaye said Trump did not consult the tribe. Begaye said the national monument is of critical importance to tribes in the region, including Navajo Nation.

"The Navajo Nation will defend Bears Ears," Begaye said. "The reduction in the size of the Monument leaves us no choice but to litigate this decision.” 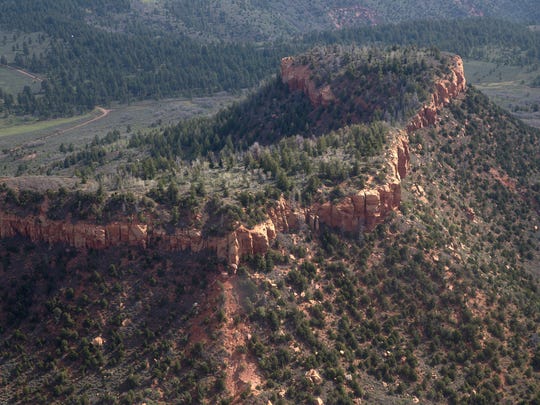 All but one of the Navajo Nation chapters in Utah support Bears Ears National Monument as it was designated by President Barack Obama last year. The designation came following a petition from the Bears Ears Inter-Tribal Coalition.

“Navajo people have advocated for protection of the Bears Ears for decades, and continue to use and value the land for their livelihoods and cultural practices," Council Delegate Davis Filfred, who represents several Utah Navajo communities, said in a press release. "This monument represents part of our history and our future."

“Responsible conservation is about compromise, balancing preservation with economic impact for surrounding communities," Pearce said in an email statement to The Daily Times. "The Obama Administration, and the Administrations before it, repeatedly abused the Antiquities Act by creating expansive national monuments that blatantly disregarded input from local communities and governments that are directly affected by these designations. Folks all across the nation deserve to have access to federal lands for recreational use, hunting, grazing, and the economic opportunity that comes with it. I’ve been working to preserve the multiple uses that some public lands can provide while preserving our environmental beauty."

U.S. Senators Tom Udall and Martin Heinrich, both Democrats representing New Mexico, have voiced support for lawsuits and questioned Trump's authority to reduce the size of a national monument.

"He is using never-tested and dubious legal theories to try to reverse designations, and he will be challenged in court," Udall said.

The monument has been controversial and Utah lawmakers have called it government overreach and a federal land grab. Signs displayed near the entrances to Blanding, Utah — a gateway community to the Bears Ears region — read #RescindBearsEars.

A White House press release states designating too much land as a national monument hurts local tax bases by restricting grazing, timber and mineral extraction and by restricting access to hunting and fishing. The press release also highlights that the Bears Ears National Monument encompassed federal, private and state land. 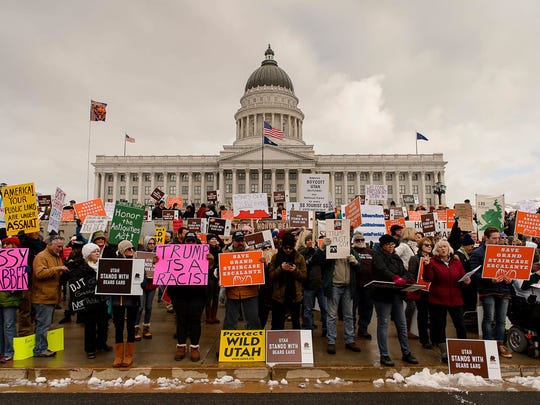 The combined acreage of the Shash Jáa and Indian Creek national monuments will be less than 229,000, which is about 83 percent smaller than the nearly 1.35 million acre original monument designation.

According to a transcript of the president's speech provided by the White House Press Office, Trump said the public lands should be controlled by the local people.

Trump said the Antiquities Act — which Obama used to designate the Bears Ears National Monument — has been abused.

"This law requires that only the smallest necessary area be set aside for special protection as national monuments," he said. "Unfortunately, previous administrations have ignored the standard and used the law to lock up hundreds of millions of acres of land and water under strict government control." 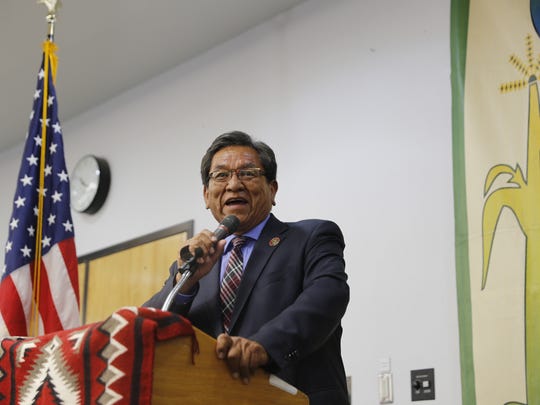 Trump said the Bears Ears designation was done despite objections from people who live in the region.

The San Juan County, Utah, commission opposed the designation, as did the Aneth Chapter of Navajo Nation, located south of Blanding.

The Shash Jáa National Monument, which takes its name from the Diné word for Bears Ears, contains the iconic twin buttes known as Bears Ears. It also includes Arch Canyon, located east of the buttes, where a large number of cliff dwellings can be found as well as numerous fossils. The monument also includes Mule Canyon, just south of Arch Canyon. The canyon includes the famous House on Fire Ruin.

Indian Creek National Monument will be located near Canyonlands National Park. It will include the Canyonlands Research Center, which Zinke visited in May. Indian Creek Canyon will be at the center of the monument. The monument will also include Newspaper Rock, a roadside rock art panel that includes both ancestral Puebloan and Ute rock art.