Powerman 5000 performs Saturday night at the Top Deck in Farmington. 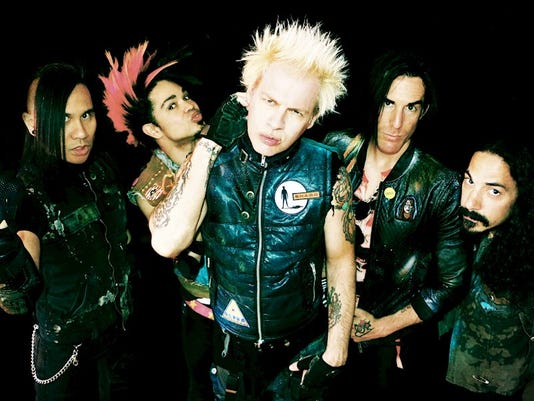 Touring in support of its new disc "New Wave," Powerman 5000 headlines a five-band lineup tonight at the Top Deck in Farmington.(Photo: Courtesy photo)

FARMINGTON — Spider One, founder and frontman for the veteran industrial rock group Powerman 5000, acknowledges that it would be a real stretch to label the band he's led since the late 1980s as a punk outfit.

But punk rock left an indelible mark on Powerman 5000 in general and Spider in particular, he said, explaining that a great deal of who he is as a musical artist is a direct reflection of the punk ethos.

"My definition of punk is different than what the modern definition is," Spider — given name: Michael David Cummings, brother of rock star and filmmaker Rob Zombie — said Thursday during a phone interview from the band's tour bus as Powerman 5000 headed to Denver for a gig that night. "The Talking Heads and Blondie were all radically different bands, but they always embodied that spirit of punk."

Spider views punk as less of a sound and more of an attitude — one epitomized by a screw-the-establishment, let's-do-it-ourselves approach to making music. In that light, he certainly qualifies as a punk elder statesman.

"I just can't shake it," Spider said of that scorched-earth approach, which he adopted early in his career and has maintained ever since, even as he approaches his fifth decade. "I've always felt that way. I've always fought the good fight. I've always felt this responsibility to not sell out." 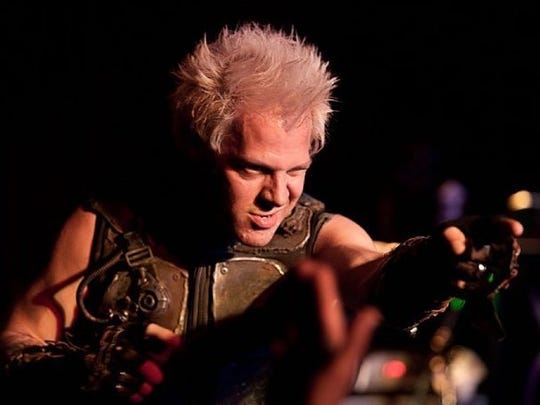 Powerman 5000 frontman Spider One founded the band in Boston in the late 1980s after dropping out of art school. (Photo: Courtesy photo by Bill Towner)

That attitude comes through loud and clear on "New Wave," Powerman 5000's latest release, which the band will spotlight during a performance Saturday night at the Top Deck, 515 E. Main St. in Farmington. The disc is highlighted by such tunes as "Sid Vicious in a Dress" and "David F------ Bowie," which invoke a pair of deceased rock 'n' roll icons who exited the stage in widely disparate fashion. The former, of course, burned out at age 21 from a 1979 drug overdose and the latter faded away at age 69 from liver cancer in 2016.

Vicious — who served as the bassist for punk's most influential group, the Sex Pistols, and was accused of murdering his girlfriend — has been dead for nearly 40 years, rendering him a cultural reference with a-bridge-too-far status for some of some of Powerman 5000's younger fans, as Spider discovered to his disappointment.

"I'm shocked," he said. "Honestly, my assumption, of course, was, 'Who doesn't know about Sid Vicious? He iconic.'"

But when Spider began checking the message boards and social media postings of Powerman 5000 fans to gauge their reaction to the release of "New Wave," he quickly realized a good many of them had no idea who Vicious was. Some even mistook him for former professional wrestler Sid Eudy, who sometimes performed under the name Sid Vicious.

"I thought, 'Why would they think we did a song about a wrestler?'" Spider said, laughing. "I guess it's just a generation gap. I think most people know who he is and remember what he was like. But one of the guys who reviewed our album confessed that he had to do a Google search for 'Sid Vicious.' I guess there are some people out there who couldn't remember the names of the Beatles, either." 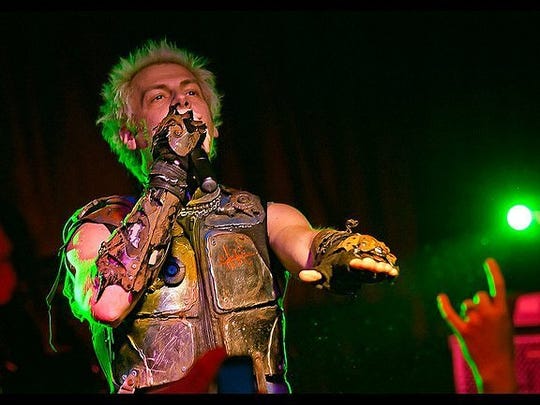 Spider One says the decline of sharp regional distinctions in American music because of the Internet have had a negative effect on creativity. (Photo: Courtesy photo)

Such lost connections to rock touchstones are a little disheartening for Spider, a Boston art school dropout who cut his creative teeth by exploring that city's almost-magical rock club music scene from the late 1980s and early 1990s. In those days, Boston had a music scene that featured such legendary clubs as the Rathskeller in Kenmore Square and the Channel near Southie, where homegrown acts such as the Pixies, the Cars and, later, the Dropkick Murphys honed their chops while national acts like the Talking Heads, the Police, Black Flag and the Dead Kennedys built a following through their regular appearances there.

Spider has difficulty explaining how important that experience was to him and his band.

"I feel fortunate that we were there at that time and started the band. … I look back on those years with a special fondness," he said. "It was a time when bands like us could thrive and get record deals. If you look at bands like Sonic Youth and the Butthole Surfers (that came out of that era and environment), they probably wouldn't even have a shot today."

Powerman 5000 emerged from that ultracompetitive environment, releasing the EP "True Force" in 1994 and its debut full-length recording "The Blood-Splat Rating System" in 1996 on. The latter, released on the Dreamworks label, launched the band as a national act and helped pave the way for 1999's "Tonight the Stars Revolt!," which would go on to sell 2 million copies and establish Powerman 5000 as a commercial force. The band hasn't scaled those same heights since then, but it has retained a loyal audience and remains one of the biggest names in metal.

“Before music was instantly available through downloads, musical sounds would germinate over the course of years in places like Seattle or Austin. Now, that's just been eliminated.”

Powerman 5000 frontman and founder Spider One

Spider looks back on the mix of circumstances of the band's ascent in the early 1990s and realizes they almost certainly couldn't be duplicated today — in Boston, or anywhere else, for that matter.

"The most important ingredient for it to happen was the absence of the Internet," he said. "And what I mean by that is how the Internet has changed music and monetized it. Nobody ever thinks about that, but what it did is, it killed the local sound. Before music was instantly available through downloads, musical sounds would germinate over the course of years in places like Seattle or Austin. Now, that's just been eliminated. If a band comes out with a unique sound, everybody copies it right away."

As a result, there's little or no musical distinction left between regions, Spider said, something that used to serve as a hallmark of American popular music.

"We didn't know what was going on in Texas music unless we got in a van and drove to Texas and played with Texas musicians," he said.

All is not lost, Spider said, but there's no question those changes have had a negative impact on music.

"There are always going to be good musicians and good bands, and there's always going to be somebody coming up with something unique," he said, drawing a parallel between the music and restaurant businesses, and how the most creative people in both those fields still find a way to mine new territory even as regional distinctions crumble. "But that's kind of sad. And I think that's part of why rock music is struggling so much."

Powerman 5000 anchors a five-band lineup at Saturday night's show at the Top Deck. The bill also includes Rachel Lorin, In My Distress, Courier and Graves of the Monuments. Call 505-325-1563 for details.