Annual Relay for Life brings out small but determined crowd

Annual Relay for Life brings out small but determined crowd 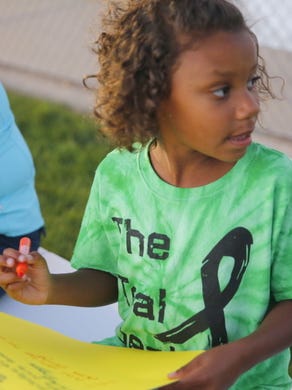 Shia Neil, of Aztec, considers what her pledge to fight cancer will be during Saturday's Relay for Life at the Boys & Girls Clubs of Farmington football field. Mike Easterling/The Daily Times
Fullscreen

Maya McGee, of Farmington, writers down her pledge to fight cancer during Saturday's Relay for Life at the Boys & Girls Clubs of Farmington football field. Mike Easterling/The Daily Times
Fullscreen

Participants in Saturday's Relay for Life mingle on the football field at the Boys & Girls Clubs of Farmington. Mike Easterling/The Daily Times
Fullscreen

Event began Saturday night and continued for next 12 hours 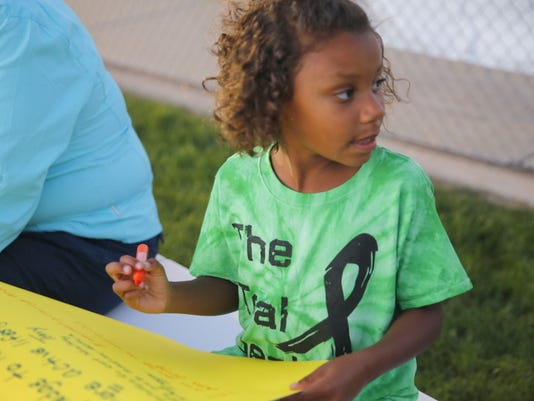 Shia Neil, of Aztec, considers what her pledge to fight cancer will be during Saturday's Relay for Life at the Boys & Girls Clubs of Farmington football field.(Photo: Mike Easterling/The Daily Times)Buy Photo

FARMINGTON — The turnout for the annual Relay for Life of San Juan County that took place here this weekend may not have been everything that event leader Mychelle McGee hoped for, but that didn't dampen the enthusiasm of those who took part or lessen their determination to help find a cure for cancer.

"We always hope for as many people as possible, but we always really looking for a great turnout of survivors — and we have that," McGee said Saturday night as dusk settled over the football field at the Farmington Boys & Girls Clubs, where the all-night event was held.

McGee, a teacher at Ladera del Norte Elementary School in Farmington, has been a part of the annual event for the last eight years and got involved with the fundraiser for the American Cancer Society at the urging of a friend.

"I thought I was too busy (to take part), but then I had a student who got cancer," she said, noting that since that time, she has had several family members and friends who have battled the disease, as well. "So I feel it is worth fighting for." 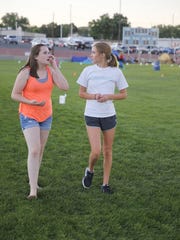 Sheriday Walker has lived in Farmington for only two years after her husband was transferred here, but she has been involved with the event here and in other communities for several years. She has survived stage 4 uterine cancer that metastasized to her lungs.

"It was kind of a toughie," she said, adding that several of her friends have dealt with cancer, as well, and she waking for them this weekend as much as for herself.

"I'm still walking and fighting until we find a cure," she said.

The event began at 6 p.m. Saturday and concluded at 6 a.m. today with events scheduled every hour to keep participants engaged as they strolled around the field. One of the highlights was the luminaria ceremony at 9 p.m. Saturday that was designed to honor and support survivors, McGee said.

She estimated that 20 percent of those who take part in the relay each year are cancer survivors, while the rest are there to support a loved one or friend. Participants walk as individuals or as members of a team.

"We have survivors on every team," she said. "And if they don't have a survivor, there's a survivor they're walking for." 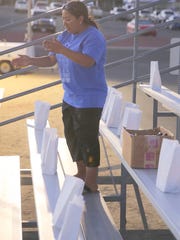 McGee said by the time the event wraps up at dawn on Sunday each year, there are typically only two dozen or so participants who have managed to stick it out through the night. And by that time, everyone has gotten to know each other pretty well.

"That's what's so neat about it," she said. "If you keep walking, you get to know everybody's reason for walking. You create great memories and great friendships here."