The PRC heard comments about the system as part of its investigation into potential fines for the water company.

AZTEC — An AV Water Co. official defended his embattled company during a Public Regulation Commission meeting today at the San Juan County Commission chambers, though he acknowledged many of its shortcomings in providing potable water to customers.

The PRC heard comments about the system as part of its investigation into potential fines for the water company.

AV Water General Manager Fred Whistle said customer complaints prompted him to visit the Morningstar water treatment system in May. An operator there told him a valve was not working.

That led to a boil-water advisory for the Morningstar system issued on May 25. The advisory was lifted June 1 and reinstated June 3.

During the boil-water advisory, one Crouch Mesa subdivision ran out of water, and HydroPure, a local company that provides water to natural gas companies, hauled water to the residents for about a week. HydroPure’s owner said during the hearing that the company took out a loan to provide the water and has not been paid by the AV Water Co. for its service. Other contractors and engineers also voiced complaints today that they had not been paid.

Commissioner Sandy Jones chided Whistle and AV Water attorney Germaine Chappelle for not following PRC orders to hang notices of the hearing on the doors of customers.

“From where I sit and the answers that you give don’t indicate to me that you were very worried about what’s been going on.” Jones said to Whistle.

But Whistle defended his management of the company.

“The Morningstar water system is in better shape today than it was when I started,” he said.

He acknowledged the Harvest Gold system is not in better shape, but he said the company is working to negotiate a sale to the system to the Blanco Mutual Domestic Water Users Association. If Blanco takes over the system, “Harvest Gold will be in better shape than it ever has been,” Whistle said.

Whistle said he believes customers should be reimbursed for buying bottled water, as well as damage the highly turbid water caused their systems. He urged the PRC to spread the reimbursement out over a year.

During the public comment period at the beginning of the meeting, dozens of customers told commissioners the water had made them sick and expressed concerns about the water they are receiving now.

Dawn Schumacher, who has lived in Harvest Gold for 14 years, said the problems with the system predate the boil-water advisory.

“The water service that we’ve had that entire time is just awful,” she said.

She said the subdivision has water outages about once a month, and even when there is water, it isn’t always clean.

“You never know what it’s going to look like when it comes out of the tap,” she said. 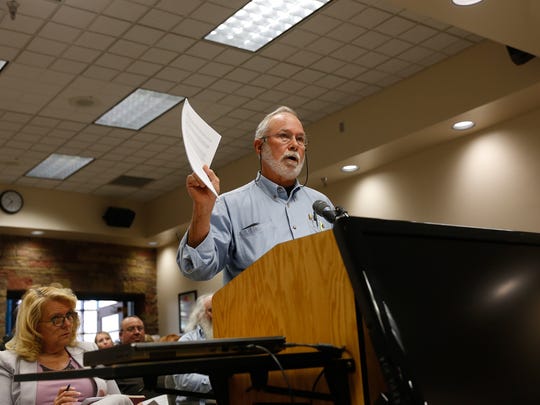 Morningstar resident Jose Nuñez said he and his sister have had intestinal problems. While a doctor told Nunez his illness was likely the result of food poisoning, he believes the water caused the issues because many of his neighbors have reported similar symptoms.

“Every time we take a shower, we get real nervous,” Nunez said.

Many other customers told commissioners they have experienced stomach pain, diarrhea and vomiting or rashes.

Mary Trujillo said her daughters were sick this summer.

“I can’t say it’s from the water, but, man, it’s sure happening to a lot of people,” she said.

Stephanie Stringer, bureau chief of the NMED’s drinking water bureau, said high turbidity can correlate with intestinal issues but the reports of rashes are not something associated with high turbidity.