The PRC will hear testimony about AV Water Co. during a meeting at 9:30 a.m. Wednesday at the San Juan County building. 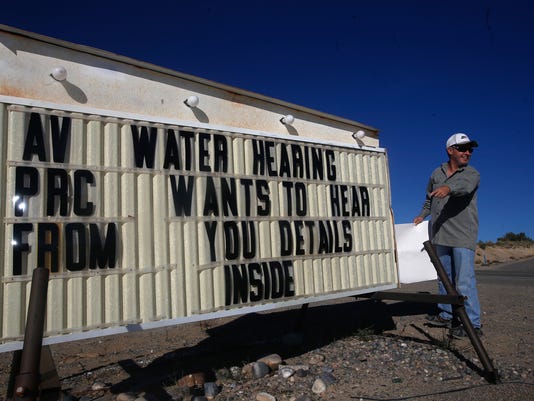 Randy Whinery points out a sign to passing motorists on Friday at Dino's convenience store in Crouch Mesa alerting them to a Public Regulation Commission hearing on Wednesday.(Photo: Jon Austria/The Daily Times)Buy Photo

FARMINGTON — As a planned Public Regulation Commission hearing for AV Water Co. approaches, many utility customers are preparing statements and encouraging others to attend.

The PRC will hear testimony about AV Water Co. during a meeting at 9:30 a.m. Wednesday at the San Juan County Commission Chambers, 100 S. Oliver Drive in Aztec.

AV Water Co. customers on the Morningstar drinking water system and the Harvest Gold drinking water system faced boil water advisories this summer. The most recent boil-water advisory was issued June 3. It was lifted for Morningstar customers on Sept. 1 but remains in effect for Harvest Gold customers. The advisory was sparked by high turbidity levels, but tests by the New Mexico Environment Department and an independent contractor for bacteria came back negative.

On Wednesday, the PRC ordered AV Water to hang door notifications on each customer's house after learning it had not provided notice through the mail or the newspaper about the hearing.

Some customers gathered Friday at Dino's, a Crouch Mesa convenience store that has served as a rallying place for those upset by the water issues, to create more than 65 signs and hang them around Crouch Mesa and the Harvest Gold subdivision east of Blanco. They said they were not confident AV Water would notify customers about the hearing and wanted to help spread the word.

"We have just been brainstorming on how we're going to get the word out," said Becky Whinery as she worked on making a sign using a marker and a brightly colored poster board.

Germaine Chappelle, an attorney for AV Water, said the company did not post notices on people's doors.

"There's really no way to get that done in a couple of days," Chappelle said.

She said the company's staff is too small to go door to door, and the process would have taken weeks. Instead, AV Water is trying to mail out notices.

"We're doing our very best to get all those notices out," Chappelle said.

While the Morningstar system no longer has a boil-water advisory, customers say they don't feel safe drinking their water.

Dawn Johnston said she made herself a cup of coffee using the water on Thursday and felt sick afterward. John Livingston said his wife got sick for more than a day when she drank coffee made using their tap water after the advisory was lifted.

"We will not drink the water that comes out of that tap," Livingston said. 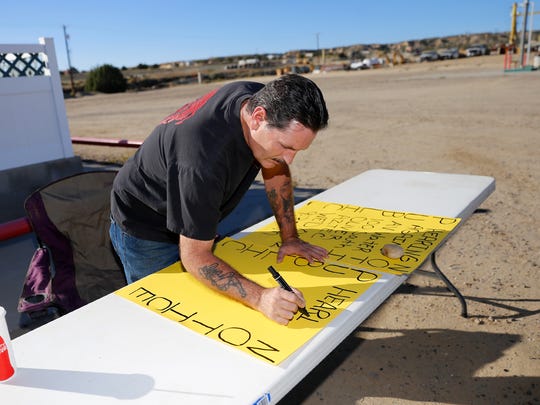 Johnston said she won't feel safe drinking the water until AV Water is no longer running the system and the infrastructure is repaired.

"As long as the system is in disrepair, it's going to corrupt the water we receive," Johnston said.

Whinery attributes the water to possibly worsening her husband's health. She said her husband's appendix ruptured on May 25, the day the first boil-water advisory was issued for Crouch Mesa.

"Drinking dirty water does not promote good health," she said.

Liz Smith said she is hauling water to her house from Farmington.

"They can't guarantee me that the lines aren't contaminated," she said.