Customers say they are receiving higher bills than in the past even though their water use has gone down.

FARMINGTON — After three months under a boil water advisory, AV Water customers say they are frustrated with water bills they claim charge them for water they haven't been able to use.

AV Water attorney Germaine Chappelle said  confusion over the bills is due to a software change that shows water use differently than the previous software. This is the first month customers’ bills have been generated by the system, which reflects seven digits on the meters rather than four digits.

Chappelle said in the past, people thought they were using 30 gallons of water when they were actually using 3,000 gallons.

AV Water sent a notice to customers stating the average person uses 2,790 gallons of water per month. Those numbers typically go up in the summer, Chappelle said. She said water bills are generally higher then because of swamp cooler use and yards being watered.

While Chappelle said residents should not be paying more for water, some customers are reporting higher bills than in the past. When Aubrea Danks received a bill for more than $145 for water use between July 6 and Aug. 6, she was surprised. Even with eight people living in the house, the family had never received a bill for more than $50, she said. The bill stated the family had used nearly 18,000 gallons of water.

Meanwhile, the family has been purchasing bottled water and using propane to boil water from the faucets after a boil water advisory was issued about three months ago.

"They're charging outrageous prices for water we can't even use," she said.

Chappelle said glitches in the new software may have caused some billing problems, and she encouraged customers with concerns or questions about their bill to contact her at germaine.chappelle@gknet.com. The New Mexico Public Regulation Commission approved a rate structure for AV Water customers in February. Customers pay a base fee of $30.77 and have additional “commodity costs” based on water use.

Customer Melissa Calderon said she thinks the company should re-examine all the bills for the past cycle instead of having customers dispute their bills.

Calderon received a bill for $171 for 20,000 gallons used over 29 days. She said last year, the highest bill she paid was $112 in September, and her average bill has been $90 a month. Her bill also stated that during the same time period last year, she used 7,800 gallons of water.

While  AV Water customers are concerned about their bills, the rates the company reports are not unusual for rural San Juan County residents. Nine of the 10 non-tribal rural water user groups either post their rates online or provided The Daily Times with rate information. 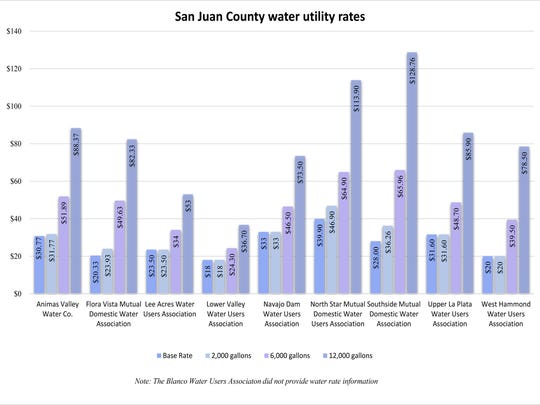 Lloyd Ayliffe, operator of the Blanco Water Users Association, declined to provide rate information for the mutual domestic water users association. But in 2014, it reported to the New Mexico Environment Department that a resident who used 6,000 gallons of water a month would pay $54.80. In contrast, an AV Water residential customer who uses 6,000 gallons of water in a month would pay $51.89.

Ayliffe also operates the North Star Mutual Domestic Water, which reported the highest base rate at $39.90. The Lower Valley Water Users Association, which serves Kirtland, Fruitland and Waterflow, reported the lowest base rate at $18. While the nearby Southside Water Users Association has a lower base charge — only $28 — than AV Water, its commodity charges are higher than AV Water’s rates.

AV Water customer Marie Brown expressed concern about the billing cycle. She said she was billed for 49 days while other people were billed for 11 or 15 days.

“There’s no rhyme or reason for how they’re doing these bills,” she said.

She also complained that the bill she received had estimated water use. 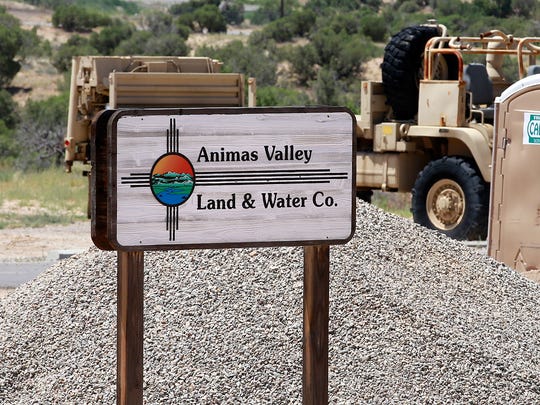 Chappelle said the company did issue bills that were estimated based on previous usage. She said the estimated bills, as well as the variety of billing cycle lengths, were due to the staff’s focus on upgrading the software and getting water to customers.

“Everybody was focused on getting the connection to Farmington,” she said.

The company is now purchasing water from the city of Farmington through a pipeline.

Customer Patricia Prentiss echoed Brown's concerns. She owns four properties on County Road 5590, as well as a property off of Southside River Road. Each of those properties was billed for a different amount of time. Prentiss said the house she lives in was billed for a 52-day period while another house she owns was billed for 14 days and, like Brown's bill, she received an estimated bill for a vacant rental property.

This summer, she said she has tried to conserve water. She said she has been nervous about using water because she didn't want to pay a high price for it.

"It's pretty rough when you can't afford to mop your floor," she said.