Concerns remain over the handling of a water crisis on Crouch Mesa. 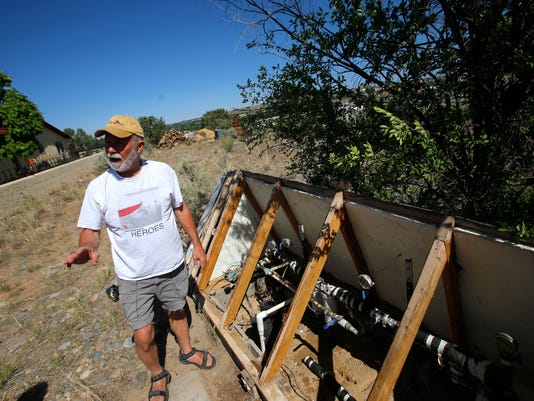 FARMINGTON — After a failure in the Morningstar Water System placed more than 6,400 Crouch Mesa residents on a drinking water alert for nearly a week, concerns remain over the handling of the crisis.

The AV Water company, which owns and operates the Morningstar system, issued a boil water advisory on May 25 as a precautionary measure after customers reported dirty tap water in their homes. The restriction was initially expected to last 72 hours, but wasn’t lifted until this morning.

Officials at AV Water said the incident was caused by a faulty control valve that recirculated dirty water back into the system, and no harmful contaminants such as E. coli were detected. Despite the reassurance, Crouch Mesa residents have expressed frustration over a lack of information provided by the company during the episode.

Beth Sutherland, a resident of the Anasazi Estates subdivision, said she first heard about the advisory from her granddaughter, who saw a post on the San Juan County Office of Emergency Management’s Facebook page. Sutherland said she had to personally call AV Water for more information, and many of her neighbors who don’t use Facebook remained in the dark.Bernie Volz, who lives on Williams Drive in Crouch Mesa, said he was notified of the advisory through a reverse 911 call issued by the county on behalf of AV Water. He said obtaining details directly from the company was a challenge.

“I couldn’t get a straight answer from anybody,” he said.

Thomas Barrow, AV Water’s operations manager, said the company attempts to contact customers personally in case of an emergency, but primarily relies on the county’s alert system to get the word out.

Bernie Volz goes through water bills and letters he has written to the Better Business Bureau about AV Water on Wednesday at his home on Crouch Mesa. (Photo: Jon Austria/The Daily Times)

“We don’t really have the resources ourselves,” he said.

Barrow said he was prepared to lift the advisory as early as Friday, after preliminary tests showed the water was not contaminated, but the company was waiting on authorization from the New Mexico Environment Department.

NMED Spokeswoman Allison Scott Majure said in a press release that the department had not received the full set of samples from the Morningstar system until late Tuesday.

The incident is not the first time Morningstar operators have come under fire for their alert system.

In 2009, the NMED issued a boil advisory for Crouch Mesa residents after detecting E. coli in the Morningstar system. According to The Daily Times archives, Crouch Mesa residents complained about a notification delay in that incident, as well, and company officials at the time promised to make improvements to their methods, including the creation of a web site and mass email database.

Neither of these improvements were in effect during the most recent episode — a situation that doesn’t surprise Volz.

Volz said he has experienced a pattern of negligence by the company. He said water quality is constantly an issue in his neighborhood, and nobody on his block drinks directly from their taps. A lack of response to customer concerns have spurred Volz to file several formal complaints against AV Water, including one with the Better Business Bureau.

The most recent incident is part of a larger pattern, Volz said, adding that if he’d known about the water problems in his neighborhood, he wouldn’t have bought his house on Crouch Mesa.

“Anytime you have an emergency situation, there are some people that want to hate you,” he said.