One dead after crashes on Broadway Avenue

One person was killed and two others were injured in separate crashes on Broadway Avenue Saturday evening.

One dead after crashes on Broadway Avenue

A vehicle lies overturned adjacent to East Broadway Avenue just west of Cortland Drive in Farmington on Saturday. One man was killed in the crash.(Photo: Steve Lewis/The Daily Times)Buy Photo

FARMINGTON – One person was killed and two others were hospitalized after separate crashes took place on East Broadway Avenue shortly after 6 p.m. Saturday, Farmington police said.

The two incidents caused police to close Broadway at several side streets, including Scott Avenue and East Cedar Street, according to a post on the department's Facebook page.

Department spokeswoman Georgette Allen said the first crash was reported at 6:15 p.m. and was a single-vehicle incident in which an occupant was killed. The vehicle was traveling west on Broadway at the time of the crash, she said. 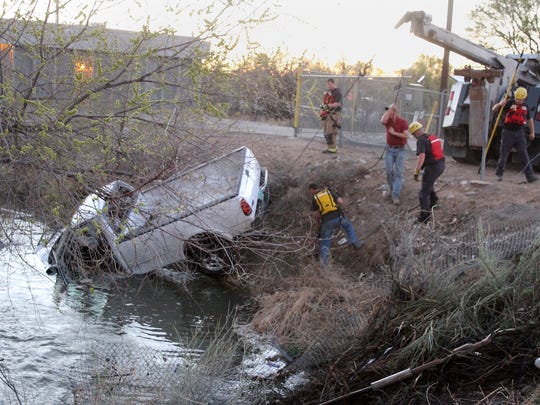 The second crash was reported at 6:31 p.m. a short distance away on East Broadway Avenue near McCormick School Road. Allen said it involved three vehicles, two of which — a Ford F-150 pickup and a silver car — wound up partially submerged in Willett Ditch. The third vehicle remained next to the road. All three vehicles were traveling west on Broadway at the time of the incident, Allen said, and the two people who were injured were transported to the San Juan Regional Medical Center.

There was no word Saturday night on the condition of those who were injured or the identity of the person who was killed.