Rodeo a reminder of dangers of drunken driving

FARMINGTON – More than a dozen years after their son's death in a car crash, an Aztec family continues to raise awareness about the dangers of drunken driving through the annual Ty Waybourn Memorial Rodeo. 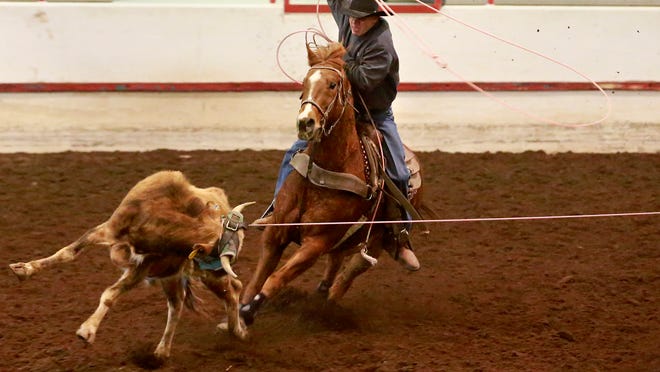 The rodeo drew about 150 contestants to the McGee Park Coliseum on Friday and Saturday to compete in events like bronc riding, bull riding, barrel racing and roping.

In one poignant moment, Mike Waybourn rode a horse into the center of the arena while leading a riderless horse behind him. The rodeo contestants and the spectators took that moment to remember Tyrell "Ty" Waybourn, who died in 2003 when he was 16 years old.

The Aztec High School student had competed in rodeo and, about a year after his death, his family put together a rodeo in his memory.

"It gives us one time a year that we honor Ty in a special way," Mike Waybourn said Saturday morning during the slack portion of the rodeo.

Ty Waybourn had left to go to a friend's house on Nov. 6, 2003, when a van collided with the truck he was in. About 30 minutes later, a sheriff's office chaplain showed up at the Waybourns' house and told them that the teenager had died in a car crash. Later, the family learned that the van's teenage driver had been intoxicated.

"It was just so senseless," Mike Waybourn said.

Since then, they have kept Ty Waybourn's memory alive through the rodeo while trying to prevent future deaths due to drunken driving.

In addition to spreading the message about the dangers of drunken driving, the Waybourns also give out scholarships from the proceeds from the event, including an academic scholarship and rodeo scholarships. Since they began offering the scholarships, they have given out more than $140,000 to local young people, including barrel racer Haley Wolfe, who is currently studying at San Juan College and who will start school at Pueblo Community College in Durango, Colo., in the fall.

The 20-year-old Aztec resident rode her horse, Mia, in the rodeo this year, finishing with times of 16.6 and 16.7 seconds. She said she was surprised and excited when she received the $2,000 scholarship.

Students can pick up applications at Aztec Feed and Supply, 216 S. Main Ave., and submit them by July 31 to be eligible for a scholarship.

Mike Waybourn explained this is one way the family shows support for high school rodeo athletes who do not get as much attention from schools as other athletes such as football players.

While rodeo doesn't benefit from the financial support that other sports do, Waybourn said it teaches young people about responsibility because many rodeo athletes own animals like horses.

The Ty Waybourn Memorial Rodeo attracts many local high school athletes, such as Cami Reed, 14, who competed for Aztec High School during the rodeo season. Reed competed in barrel racing and breakaway roping during this weekend's rodeo.

"I just like that you're able to do it and connect with your horse," she said. "When I get on, I feel a connection I don't feel anytime else."