FARMINGTON – Area school districts are working together to improve Internet access to schools in San Juan County as part of a state program that might lead to the installation of a new fiber-optic network.

The Aztec, Bloomfield, Central Consolidated and Farmington school districts are teaming up with state agencies and a nonprofit organization to use state and federal funds to improve Internet access for schools while reducing costs.

The consortium, including the state Public Education Department, Public Schools Facility Authority and Department of Information Technology, and nonprofit EducationSuperHighway, was formed as part of Gov. Susana Martinez’s plan to bring high-speed Internet to every New Mexico classroom by 2018.

Charles Thacker, executive director of technology for the Farmington Municipal School District, said the district is leading a pilot program to see if Internet service providers would be interested in installing a fiber-optic network in San Juan County if state and federal money helped pay for construction.

A 2008 study estimated the cost of expanding the district's fiber-optic network to schools not connected to the network at about $1.5 million or $2 million, according to Thacker. Eleven schools depend on leased microwave towers to connect to the district’s technology office for network access.

The increased network capacity is critical to the future of classroom instruction and testing since online materials are becoming more interactive, Thacker said.

"There is audio, video, animation, not just text content anymore," Thacker said. "It's more and more bandwidth intensive for that educational content for us to be able to access it."

The FCC currently requires school districts to have enough Internet bandwidth for every student to have a 100-kilobit-per-second (kbps) connection. The long-term goal is to require schools to have a 1 megabit per second, or 1,000 kbps, connection for each student — 10 times higher than the current requirement. 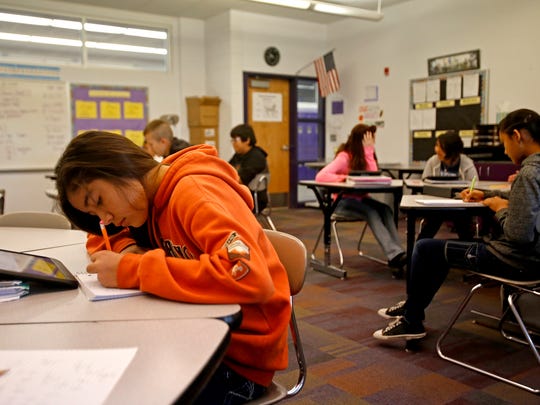 Florez said the Bloomfield district meets the current requirement but would need to improve its network to meet the future requirement.

“Right now, we’re probably about average in the state, from what I’ve seen,” Florez said..

The district has to lease a microwave tower to send Internet traffic to Farmington since the city doesn’t have available fiber for use, according to Florez.

Nussbaum said the district has run into issues with companies reluctant to install services for schools in Naschitti, Newcomb and Fruitland. He also said there is no direct fiber connection between Kirtland and Shiprock.

Internet traffic has to travel a route of about 400 miles from Kirtland to Farmington to Albuquerque to Gallup to Window Rock, Ariz., to reach Shiprock.

Nussbaum said Internet service for part of the district was down on Oct. 14 for about four hours after a fiber-optic line was cut in Tohatchi,

The districts are working to apply for the next round of e-rate funding early next year.