Efforts to build a student housing complex at San Juan College have hit a one-year delay due to an issue with the original site. 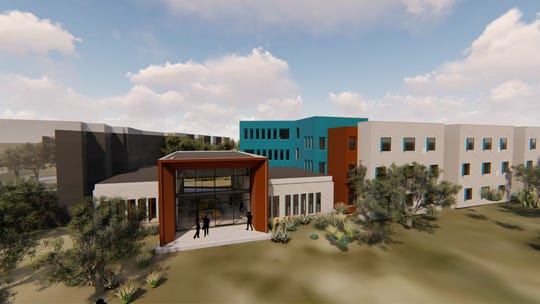 A rendering of the proposed exterior of the in-development San Juan College housing on its main campus in Farmington. College officials are hoping for an August 2021 opening date. The design is expected to remain the same after moving it to a new location on campus. (Photo: Stantec Architecture Inc.)

FARMINGTON — Efforts to build a student housing complex at San Juan College have hit a one-year delay due to an issue with the original site that required the college to move the project to another part of the campus.

A study found that the first site had been used as a landfill, and cleaning out the old garbage would have added too much to the price tag.

The new proposed site is near the Health and Human Performance Center along Sunrise Parkway, the road that connects the campus to North Butler Avenue.

The nearly $25 million housing project could accommodate around 380 students.

The college's Board of Trustees in August authorized College President Toni Pendergrass to finalize a pre-development agreement with Balfour Beatty Campus Solutions for the project's first phase.

About 60 percent of units will be four-bedroom, two-bathroom furnished apartments with full kitchens and living rooms.

The remaining units will be furnished two-bedroom apartments with two beds per room and two bathrooms. 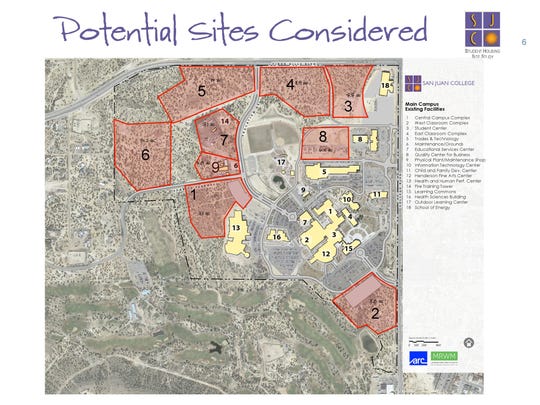 A slide from a presentation Ed DesPlas, San Juan College's executive vice president, gave to the college Board of Trustees show possible alternative sites for the $25 million student housing complex. The site labeled One is the new location for the project. (Photo: San Juan College)

The original building site was on the northwest corner of the Farmington main campus along Education Drive, on the site of the fire tower and near the baseball and soccer fields.

Ed DesPlas, the college's executive vice president, said the original site was previously used as a landfill. About two to four feet of dirt covers about two to six feet of garbage, and the site is not able to support the weight of the development, according to DesPlas.

The company that conducted the environmental studies suggested college officials pay to scoop out the dirt and garbage and haul it to a landfill.

The next step would have been putting in filler dirt and compressing that to make it a suitable site for student housing at a cost between $250,000 and $500,000.

"We thought, 'Well, let's take a look at what is happening around the college, where are other good sites,'" DesPlas said.

Multiple sites were evaluated across campus with a possible site near the Henderson Fine Arts Center parking lot placing second behind the new location, DesPlas said.

"It's a big, big space," DesPlas said of the preferred site. "It could accommodate a couple of phases of student housing if we move beyond the first phase."

The project's budget remains the same, but the new completion date is set for August 2021, a year later than the original date. The design of the complex is expected to remain the same.

"I think we found a better site," DesPlas said.

Board President John Thompson said it was disappointing to hear about the delay given the amount of student interest in the project.

He didn't realize that student housing would be such a big issue and help so many people, including those who live in the vehicles while pursuing a certificate or degree.

"It's amazing the hardships they go through," Thompson said.

DesPlas hopes to finish the financial work by December and have bonds for the project sold and closed.

A groundbreaking is being eyed for early 2020.