Attorney general on hand for unveiling of new system 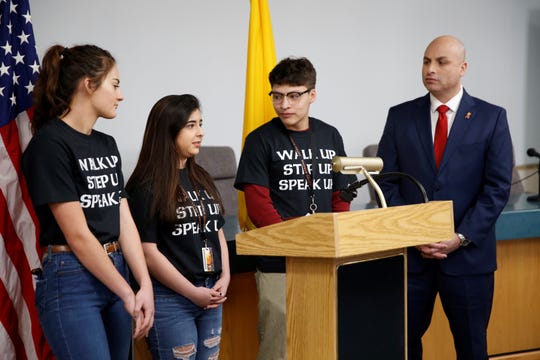 The announcement was made at the Aztec Municipal School District central office.

The Rave Panic Button app can be used to report incidents that require immediate 911 assistance and request the aid of fellow staff members.

When an emergency situation arises, the user can identify the button in the app that represents the nature of their emergency, including options for fire, medical, police and active shooter. The person who activates the active shooter button immediately will be connected to 911, and an emergency alert will be sent to all users at the same time.

If a person activates the medical button, key administrators and staff members with medical training will be notified.

"The threats are evolving, and we should have the best communication tools, the best training and the best technology implemented," Balderas said.

The San Juan County Communications Authority is implementing and paying for the system, and it is being offered to schools for free, according to director David Ripley.

Balderas introduced three Aztec High School students he said he has gotten to know since the Dec. 7, 2017, shooting in which 17-year-old students Casey Marquez and Francisco "Paco" Fernandez were killed.

Adam Jones, Sara Gifford and Maggie Dimas each spoke about their effort to have the voices of students and parents involved in discussions of school safety. They they supported the new app.

"We thought it was very important to do what we can and make sure people are hearing our voices," Jones said.

"The legacy of Casey and Paco is in our hands," Carpenter said. "It's up to all of us to make change."

San Juan County Sheriff Shane Ferrari and Aztec Police Chief Mike Heal stated they were excited to have the app, adding it would save time by allowing them to immediately respond to incidents.

Training will take place with staff members before the app is deployed, Carpenter said.

The county communications authority hopes to get the Farmington Municipal School District on board with the system and expand to more schools, according to Ripley.