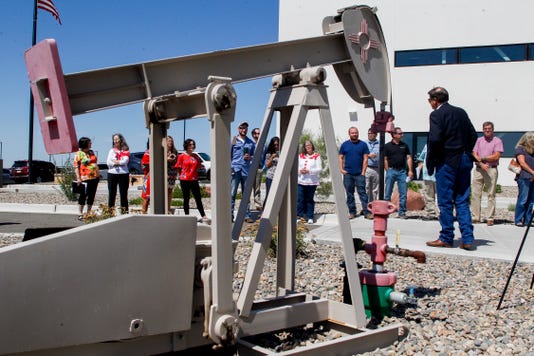 FARMINGTON — The grounds of the San Juan College School of Energy are home to a replica pumpjack that was installed this week after it was donated by a New Mexico State Land Office commissioner.

Officials from San Juan College and Commissioner Aubrey Dunn celebrated the donation of the miniature replica pumpjack during a ceremony this morning.

The pumpjack with a red Zia symbol on its side was first installed in the summer of 2015 at the New Mexico State Land Office in Santa Fe. It is a working model with its motor powered by solar panels.

San Juan College President Toni Pendergrass thanked Dunn for the donation to the San Juan College Foundation. She explained during the ceremony that the pumpjack commemorates the first commercial oil and gas pumpjack used on state land.

Yates Petroleum installed the first commercial pumpjack on state trust lands in 1924, according to Dunn. 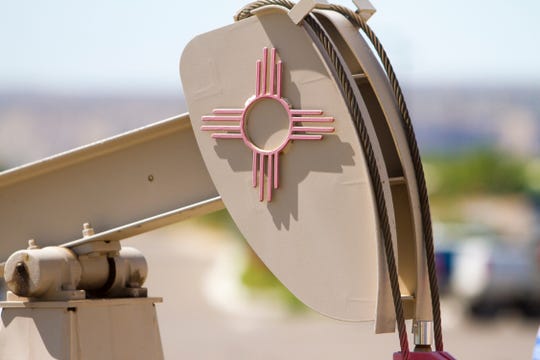 A zia symbol is display on the side of the new replica pumpjack Wednesday near the entrance to the San Juan College School of Energy in Farmington. (Photo: Jon Austria/The Daily Times)

"I think it represents how important the oil industry is for New Mexico and what it generates," Dunn said about the pumpjack.

The replica pumpjack became the subject of controversy at its original home in Santa Fe after Dunn had it installed at the state land office in place of an existing work of art. The Santa Fe New Mexican reports that some Democrats had discussed removing it to help demonstrate the agency would focus more on renewable energy and conservation.

Dunn said in a press release he donated the pumpjack to the college to ensure the next administration doesn’t desecrate or destroy the pumpjack. He described the pumpjack as an important symbol, and the fate of artwork shouldn’t be determined by political whim, according to the press release.

Dunn said he was happy to learn the San Juan College Foundation was willing to place it at the School of Energy. 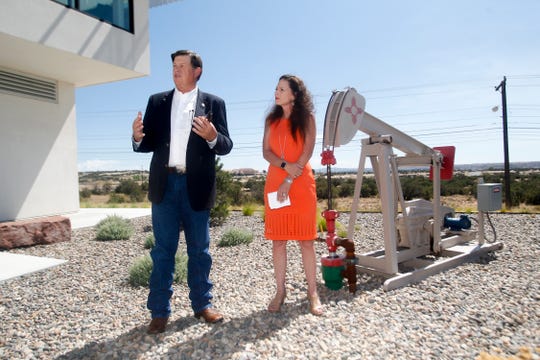 Dunn did not seek re-election to the state Land Office commissioner position. But he is running as the Libertarian Party candidate for the U.S. Senate for New Mexico in the November general election against Republican candidate Mick Rich and incumbent Democrat Martin Heinrich.

The pumpjack was transported to the college Tuesday and installed that evening.

Solar panels to power the pumpjack's motor will be installed soon, according to Dean.