BLOOMFIELD — The Bloomfield Municipal School District school board has made changes to the district’s substance abuse policy, adding standard consequences for violations.

“We adopted it last year, kind of mid-year, and now that the principals have lived with it, they’ve found that certain parts of it were very challenging, like the next steps and things like that,” Superintendent Kim Mizell said. “(The school board has) basically simplified it so it’s not as complicated, and it’s more manageable. We’ve just revised it to facilitate the work that they’re doing with kids.”

The board unanimously approved the revisions during a regular meeting on Tuesday. Board members Tony DeHerrera and Veronica Tso were absent from the meeting.

Mizell said the board adopted the policy last year with the intention of having an “intervention-based policy” that works closely with students and their families.

“We want to help students if they’re struggling and give them an opportunity to give them intervention or help if they’re having any kind of addiction,” Mizell said during a meeting break on Tuesday. “It leans in that direction, so for example, if we find that a student is struggling with (substance use) and they’re caught at school, there’s consequences and we give them the option to get help.”

The policy emphasizes the importance of preventative measures and early intervention, and allows students to approach district staff members for help in the student self-referral diversion program, which does not involve disciplinary consequences and refers students in need to appropriate resources, according to agenda documents.

The revised policy outlines standard consequences for violations. For first and second violations, a student would receive a total of nine days of in-school or out-of-school suspension and is required to complete a substance abuse screening with a school designee before the suspension is served. For third or subsequent violations, a student would be required to serve a nine-day suspension and complete a screening, as well as participate in a hearing with district staff members regarding long-term suspension or expulsion, according to agenda documents.

The policy also requires the district administration to “take a student’s personal circumstances, such as homelessness or families in crises, into consideration” in enforcing the policy and deciding consequences for violations.

Mizell said 95 students at Bloomfield High School, Charlie Y. Brown High School and Mesa Alta Middle School were identified as at-risk young people in the 2016-17 school year, but that the rate of students violating the policy decreased after the policy was implemented at mid-year.

The majority of students who wound up violating the policy last year struggled with alcohol abuse, Mizell said. She said the number of cases involving the abuse of prescription drugs, marijuana or tobacco was “not significant enough to report,” but that the district is fine tuning its system that identifies students' substance abuse problems to better understand their needs. 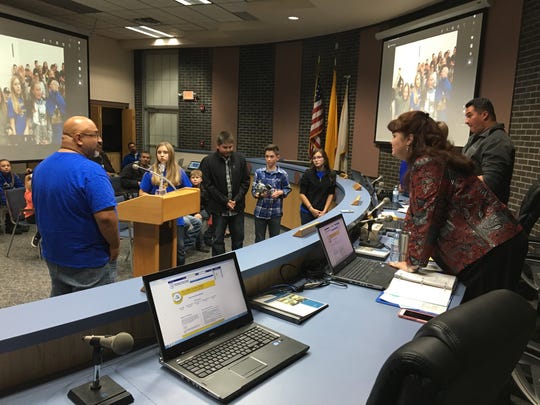 At Tuesday’s meeting, the school board also witnessed a presentation by students and staff members involved in Blanco Elementary School’s robotics program.

Sixth-grade teacher John Gutierrez said the school has incorporated First Lego League robotics in science classes at the school over the past two years. The school has also hosted an after-school robotics program with fourth- and fifth-grade students. Seven teams participated this year, and five participated last year.