San Juan College graduates walk toward the Learning Commons Plaza during the 2017 college commencement ceremony in this file photo. The college was among six local winners of a statewide award for family-friendly personnel policies. Joshua Kellogg/The Daily Times
Fullscreen 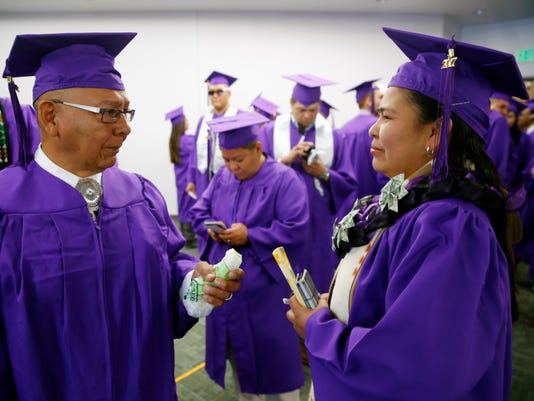 FARMINGTON — Regina Yazzie was one of the nearly 1,850 students who received their diploma or certificate during Saturday's San Juan College commencement ceremony.

Yazzie eagerly stood among her fellow graduates from the School of Energy before the ceremony in the Henderson Performing Arts Center, urging her classmates to take photos with her before they walked out to cheering friends and family members in the Learning Common Plaza.

The ceremony honored about 1,750 San Juan College graduates earning a certificate or associate degree. More than 100 graduates from the Farmington locations of New Mexico Highlands University and the University of New Mexico who earned bachelor’s and master’s degrees also were recognized.

The 39-year-old Yazzie said she was proud to earn her associate of applied science degree from San Juan College after a long journey that took her from the Philippines to Farmington. Born to a Filipino mother and a Navajo father, Yazzie lived in the Philippines until she was 33.

Howard Yazzie, Regina's father, said he met Regina's mother, Elsa Guevarra, in the Philippines while he served in the Navy in 1976.

"She has come a long way," Howard said before the ceremony. "She wanted to go to school."

Regina said she was eager to meet her dad and her family, who live in Shiprock.

"Since I was born, I missed my dad," said Regina, who is an American citizen. "Every birthday, I wished to see my dad." 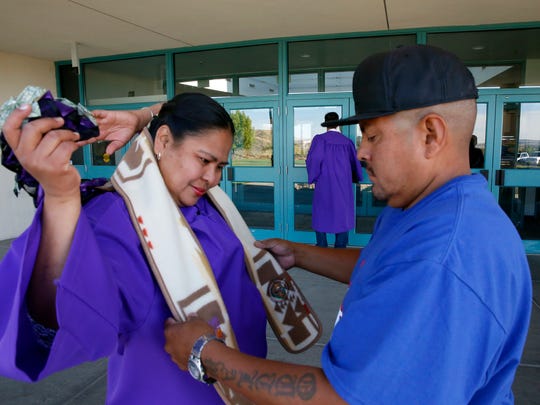 Her first trip to the United States only lasted about five months. She grew homesick and felt out of place in America, and moved back home to the Philippines in May 2012.

But she came back to the United States in November 2012, this time settling in San Diego. Regina worked at the San Diego International Airport for nine months before returning to the Philippines again because of homesickness.

It wasn't until her brother Hillario Chavez, a Shiprock resident, visited Regina in the Philippines in January 2014 that she was ready to try living in the United States again, moving to Shiprock in March 2014.

She credited her friends Kelly Bates and Brenda Blevins for helping her find a place to live in Farmington and enrolling in San Juan College.

"I needed something to do," Regina said. "I wanted to make something of myself."

Regina started taking classes in the spring 2015 semester and enrolled in the industrial process operator program. Howard is a retired oil field worker and believes his experience led Regina to choose a career in the oil and gas industry.

"She feels like home now here. She's gotten used to it," Howard said.

Regina is adjusting to living in the Four Corners region, learning the Navajo language and enjoying frybread.

"I think it's really important to understand your family," Regina said. "Some of my aunties speak to me in Navajo, and I can't understand them. I'm hoping I can learn more."

While in the United States, Regina has been sending her mother money and hopes to bring her for a visit soon.

"She was crying (Thursday)," Regina said. "I was talking to her on Facebook (Thursday), and she said, 'I am so proud of you, honey.'"

Shannon Benally, an administrative assistant in the college's Native American Center, has helped Regina apply for scholarships. She is amazed by the journey Regina has made.

"To see that transformation, it's huge," Benally said.

For the future, Regina is hoping to find a good job and hopes to remain in the area but is ready to relocate if the job is good enough.