FARMINGTON — There are nine board of education seats across four San Juan County school districts on the ballot for Tuesday's election, along with a $26 million bond election for Farmington schools.

"I think the bond would continue to move us to a new world where 21st century learning is possible," Schmidt said.

The last Farmington schools bond election was held on Feb. 4, 2014, and was for $35 million. It was approved by voters.

If approved, the new bond will not increase property taxes. The district's tax rate would remain at $9.691 per $1,000 net taxable value of a home.

The bond would ensure classroom and learning spaces across the district would be environmentally safe and secure, Schmidt said. Projects for 15 district schools are scheduled to take place if the bond is approved.

The largest project will be the renovation and expansion of McCormick Elementary School, which is estimated to cost about $7.9 million, according to Ted Lasiewicz, the district's director of operations. 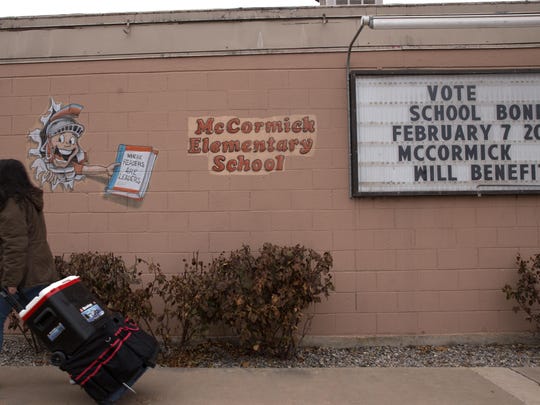 It would lead to the construction of 13 new classrooms, including a new wing of eight classrooms for kindergarten and first-grade classes. Also included in the project is a new front office space and secure entryway, a new computer lab and a new student drop-off lane.

Some of the repairs at district schools include roof replacement, replacement or repair of heating and air conditioning systems, cafeteria renovations and playground improvements at nearly every elementary school.

The district's assistant superintendent, Phil Valdez, said the bond is crucial because projects like the work at McCormick Elementary School are entirely funded by the district.

"It's unfortunate because of the state revenue being down, the funds we've received for new construction (have) gone away," Valdez said.

Repairs at district schools will extend the life of the buildings until they possibly can be rebuilt with funds from a future bond election, according to Valdez.

The board elections for the Aztec, Bloomfield, Central Consolidated and Farmington schools will feature only one contested race.

Christina J. Aspaas, secretary for the Central Consolidated School District Board of Education, is facing write-in candidate Ramondo Clah to be the District 4 representative. The candidates for the other eight school board seats are running uncontested.

Aspaas was appointed to the CSSD board during an Oct. 2, 2012, meeting and was elected to the seat during a Feb. 5, 2013, school board election. District 4 includes parts of Sheep Springs, Kirtland, Nenahnezad, Tiis Tsoh Sikaad and Upper Fruitland.

Aspaas, an electrician for the North American Coal Corporation, said she believes having consistency on the school board is important.

Prior to her daughter graduating from Kirtland Central High School in 2011, Aspaas spend two days attending class with her daughter. She said she learned first hand that schools needed to be improved, and that led her to pursue a seat on the school board.

Aspaas believes there is a huge learning curve involved with becoming a school board member, and that's what prompted her to run for re-election.

School safety is a top priority for Aspaas. She cited the death of Ashlynne Mike as one reason she will work to ensure the safety of students at district schools. The girl was kidnapped along with her brother Ian Mike on May 2 while they were walking home from school. Ashlynne was found dead the next day.

Clah is a human resources supervisor for Pumpkin Patch Fundraisers Inc. and is pursuing a business degree at San Juan College. He said he decided to run because his friends who are CCSD teachers told him they questioned the operations of the school board. He also wants to bring some clarity and transparency to the board.

Ramondo Clah, a write-in candidate, will face Christina J. Aspaas, the current secretary for the Central Consolidated School District board, in a race to represent District 4 on the CCSD board. (Photo: Joshua Kellogg/The Daily Times)

"I would want to unify the community with the school district," Clah said.

Sheldon Pickering is running for the CCSD District 1 seat after board President Randy Manning decided to not run for re-election after 24 years on the board.

Park Avenue Elementary School teacher Fran Dobey is running to be Aztec District 1 representative after Mitch Waggoner declined to run again after serving on the board since 1999. Jimmy Dusenberry, current District 3 representative, is running for re-election.

On the Farmington board, Vernon Corley is running for the District 3 seat that current board member Bill Young is vacating after two terms. Current District 2 representative and Secretary Robyn Hoffman is running for her second term.

The two voting convenience centers for CCSD voters are at Judy Nelson Elementary School at 40 Country Road 6580 in Kirtland and the Nenahnezad Chapter at West U.S. Highway 64 and County Road 6675 and Navajo Route 365 in Fruitland.

There are three locations for Farmington residents to vote in the school board and bond elections. Residents can vote at the Farmington schools central administration office at 2001 N. Dustin Ave., the Farmington Museum at Gateway Park at 3041 E. Main St. and the Sycamore Park Community Center at 1051 Sycamore St.

Voting will take place from 7 a.m. to 7 p.m. Tuesday. Absentee ballots also can be dropped off at the voting convenience centers during that time.

Editor's note: This story was updated on Feb. 7 to correct an error. The story incorrectly listed the candidate for the Bloomfield School District Board of Education District 4 seat. Tony DeHerrera is running unopposed for that seat.