Students will return to new school in Kirtland

Students will return to new school in Kirtland

KIRTLAND — Kindergarten teacher Kali Warner was putting the finishing touches on her classroom today so it would be ready to welcome students Tuesday to the new Judy Nelson Elementary School.

Teachers and staff members used the winter break to move into the new 94,882-square-foot building that will house approximately 595 students from kindergarten through sixth grade.

There were days when Warner spent eight hours unpacking boxes that were delivered from the portable building she taught in behind Grace B. Wilson Elementary School.

"I have my boxes unloaded, and we're ready to go," Warner said.

The new school was built on the site of the old Ruth N. Bond Elementary School, which was demolished in 2015.

Warner taught at Ruth N. Bond, and her 18 students would watch construction of the new building from their classroom in the portable building. "It's nice to have matching furniture. At Ruth N. Bond, it was a hodgepodge of what we could find," she said.

She later added, "Change is hard, but being in a new building, once we get settled and get back into the swing of things, I think our year is going to be great."

Principal Steve Carlson said staff members were notified in October about plans to move into the new school during the winter break and were asked to start packing nonessential items then.

He added this was the second time in less than two years that teachers from Ruth N. Bond have had to move.

"A building is just a building, but it's a school once there are little bodies occupying it," Carlson said. 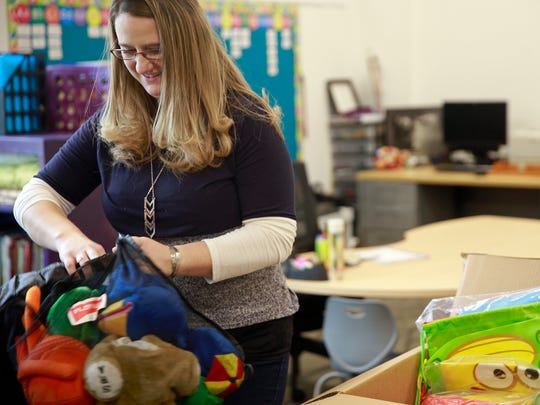 To help with the transition from Grace B. Wilson to Judy Nelson, teachers were encouraged to tour the building with students and a test drop-off and pick-up of students at the new school was conducted on Dec. 15.

For 31 years, Larissa Pioche has worked as an educator and counselor, including work at Ruth N. Bond, but this is the first time she has moved into a new school. Her office had boxes in various stages of being unpacked today, but she was enjoying the experience.

"The kids will be very excited because I think they will like the atmosphere. …The new environment will inspire kids to learn," she said.

Pioche was among the school personnel who served on the committee that gathered input to determine Judy Nelson's design.

"Now it is a reality, but it is still so hard to believe that this is the reality. We had those dreams, plans. Those dreams come true," Pioche said.

In her classroom on the second floor, fourth-grade teacher Vicky Mallow was unpacking and sorting items.

During the Dec. 15 visit, her students brought their binders, books and supplies to the classroom.

"They know where they're sitting, they know the building and they know the room right now. We just have to make it our own," Mallow said.