County school board elections set for next year

San Juan County residents will vote next year on nine board of education seats across four school districts.

County school board elections set for next year

A $26 million general bond question is on the Farmington schools ballot that, if approved, will not increase property taxes 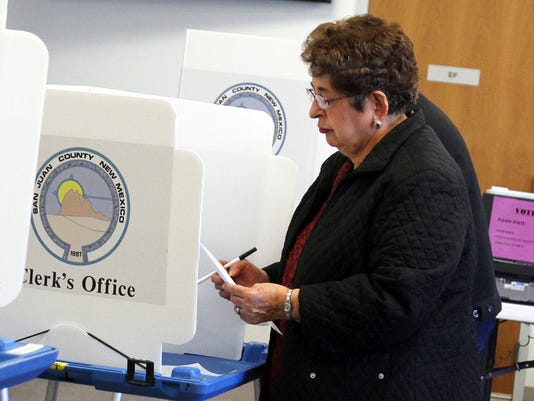 Nioma Gallegos looks over her ballot before voting on Feb. 5, 2013, at the Aztec School Administration Building.(Photo: Daily Times file photo)

FARMINGTON — San Juan County residents will vote next year on nine board of education seats across four school districts and a $26 million bond issue for Farmington.

Board elections for Aztec, Bloomfield, Central Consolidated, and Farmington schools are scheduled for Feb. 7.

The Farmington district also has a $26 million general obligation bond issue on the Feb. 7 ballot that, if approved, would fund an extensive renovation of McCormick Elementary and capital projects at all district schools, according to Randy Bondow, the district's chief financial officer.

The last bond election held by Farmington schools was in February 2014 for $35 million.

The district was pursuing a $22.5 million project to rebuild the McCormick Elementary building, but those plans were dropped when the New Mexico Public School Facilities Authority declined to provide state funding for the project.

“If things would have been different with the funding from the state, which we no longer have, we would have replaced McCormick,” Bondow said.

The current plan for McCormick is to construct 13 new classrooms, a new front office and an entrance with a new parent drop-off area at a cost between $6.92 and $8.11 million. It would help move students out of the nine portable classrooms currently on school grounds.

Most of the projects would focus on improving district schools, including security upgrades, roof repairs, improving heating and conditioning systems, and classroom and elementary school renovations.

If approved, the district’s current tax rate of $9.691 per $1,000 net taxable value of a home would remain the same, Bondow said.

For the board of education elections, the school board candidates would serve a four-year term starting on March 1 if elected.

For Aztec, the District 1 and 3 positions are up for election. District 1 Representative Mitch Waggoner was appointed to his seat in June 1999 and was voted to his first full term during a Feb. 3, 2001, election. Board Secretary Jimmy Dusenberry is the current District 3 representative, and he was a write-in candidate during the Feb. 5, 2013, election.

The seats for CCSD Board President Randy Manning and Secretary Christina J. Aspaas are scheduled to be on the ballot. Manning, the District 1 representative, is in his sixth term after being elected to office in 1993. District 2 Representative Aspaas won her seat during the Feb. 5, 2013 election.

For Farmington, the District 2 and 3 representatives are up for contention in February's election.

Declarations of candidacy must be filed between 9 a.m. and 5 p.m. on Tuesday Dec. 20 with the San Juan County Clerk at the county administration building at 100 S. Oliver Drive in Aztec.

Joshua Kellogg covers education for The Daily Times. He can be reached at 505-564-4627 and jkellogg@daily-times.com.