County educators and community members shared their frustrations with the state of education in a meeting Friday.

New Mexico Secretary of Education Hanna Skandera says the state already has done much of the work required under the new Every Student Succeeds Act.(Photo: Jon Austria/The Daily Times)Buy Photo

FARMINGTON — San Juan County educators and community stakeholders shared their frustrations with the state of education and made suggestions to address some of their concerns during a series of community meetings Friday.

The meetings were held by the New Mexico Public Education Department as part of a community outreach effort to help implement its plan for the federal Every Student Succeeds Act.

During an interview Thursday, State Education Secretary Hanna Skandera said New Mexico has already done a lot of the heavy lifting required by the ESSA.

Some of the ESSA requirements are met by programs introduced in recent years, including the Partnership for Assessment of Readiness for College and Careers (PARCC) exam, the A-F school grading system and the teacher evaluations conducted as part of the NMTEACH Educator Effectiveness system.

“We have a solid foundation. We’re in a good place,” Skandera said in the interview.

Signed into law by President Obama in December 2015, the ESSA reauthorizes the Elementary and Secondary Education Act, the national education law. The ESSA replaces the previous version of the law — the No Child Left Behind act — enacted in 2002. 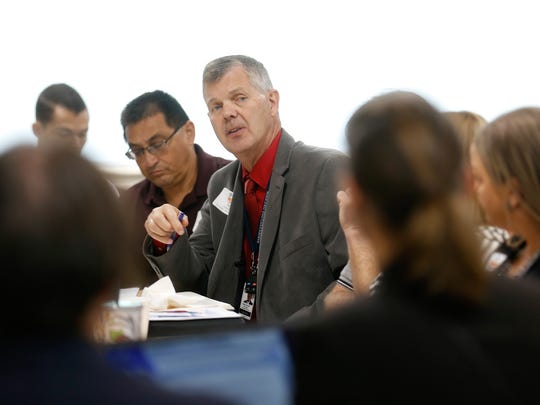 The two groups discussed what they feel is working and not working in their schools and districts, and offered some suggestions to address the issues.

Superintendents from all four San Juan County public school districts were on hand, along with district staff members and school board members. Also in attendance were representatives from San Juan County government, the Bureau of Indian Education, local nonprofit organizations and members of the business community.

Members of the discussion group The Daily Times observed spent most of the time discussing what issues they are facing in the classroom and in their school districts.

Multiple people shared their frustration with the operations of the teacher evaluation system and the PARCC exam, struggles with parental engagement, issues with teacher morale, supporting students learning the English language and support for low-performing schools.

“The (teacher) evaluation system is one of those things really challenging for us,” Central Consolidated School District interim Superintendent Colleen Bowman said after the meeting.

Bowman said the district is challenging the teacher evaluation reports of about 74 teachers in the district who were rated ineffective or minimally effective.

For San Juan County CEO Kim Carpenter, he felt it was important to address the morale of teachers who are leaving the state to teach in other states or abroad in different countries.

“We’re seeing a loss of a lot of good teachers,” Carpenter said after the meeting.

Carpenter has witnessed county employees leave their positions because their spouse is a teacher and is leaving New Mexico to teach elsewhere.

Robyn Hoffman, secretary for the Farmington Municipal School District Board of Education, also spoke about how teacher pay in New Mexico is an issue that needs to be addressed.

Bloomfield School District Superintendent Kim Mizell suggested students learning the English language be given more time on the PARCC exam so they truly demonstrate their knowledge, as the time element is fairly restrictive on them.

Mizell also suggested a better system to identify low-performing schools so staff members at the schools can participate in turnaround programs offered by the PED to improve student instruction.

At the end of the meeting, Skandera said the input from the discussion was valuable.

“We look forward to taking all the voices we hear across the state and looking to solutions and opportunities to work together,” Skandera said during the meeting.

New Mexico’s plan to implement the ESSA must be submitted to the U.S Department of Education in March 2017 with most provisions scheduled to take effect for the 2017-2018 school year.