Two members of the Shiprock Associated Schools Inc. school board have been removed from office.

Candidate Frank Smith is featured on a sample ballot recently at the Navajo Nation Election Administration office in Shiprock. Smith was one of two members of the Shiprock Associated Schools Inc. board who was removed from the board and disqualified to hold a Navajo Nation office.(Photo: Daily Times file photo)

SHIPROCK — Two members of the Shiprock Associated Schools Inc. school board have been removed from office and were disqualified as candidates for today’s  Navajo Nation primary election.

SASI Executive Director Julia Donald said she received official notices from the Navajo Election Administration that board Vice President Kerlena Tso and member Frank Smith have been removed from their seats.

The notice Donald received from the election office for Tso was dated Aug. 10, according to a copy of the letter provided to The Daily Times.

In the letter, it states Tso falsified her candidate application by not listing an aggravated driving while intoxicated conviction more than 16 years ago. A copy of court records included in the letter shows Tso plead guilty on April 20, 2000, to the DWI charge in Farmington Municipal Court.

The tribal election code cited by the letter states that a candidate for the school board must not be convicted of a misdemeanor including any crimes involving “intoxicating alcohol or illegal substance abuse." According to the letter, Tso is ineligible to run for any Navajo Nation elective office for a minimum of eight years.

Donald declined comment on Tso’s removal and why Smith was removed. She said she received Smith’s notice last week. 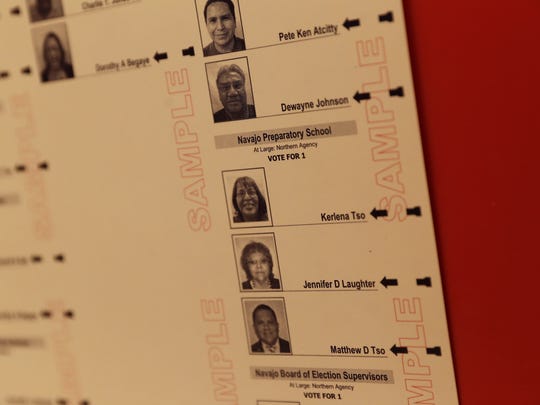 Kerlena Tso is pictured on a sample ballot on the front door of the Hogback Chapter House. Tso was removed from the Shiprock Associated Schools Inc. school board. (Photo: Daily Times file photo)

Tso was elected to the board in 2014, and Smith was elected in 2012, according to results on the Navajo Election Administration website.

Both board members were candidates on the ballot for today’s  tribal primary election.

Edison Wauneka, executive director of the election administration office, said the ballots already had been printed before the notices were sent out. He said the votes for the candidates will not count, and they will not be on the ballot for the general election in November.

Tso was running for a Northern Agency chapter at-large seat for the Navajo Preparatory School board against incumbent Jennifer D. Laughter and Matthew Tso.

Both board members were included in an unofficial candidate list for the Northern Agency chapters released on June 6. According to tribal law, the election administration had up to 30 days from the date applications were received to review and certify them.

A special election will be held in the future to fill the SASI board seats, Wauneka said. A date has not been set for the election.

The SASI school board has three remaining board members — President Leonard Anthony, Secretary Eva B. Stokely and Dorothy Begaye. Donald said the board can still operate and meet quorum with the three board members.

“Minus the two board members, it’s business as usual for the school,” Donald said.