The Board of Education is looking at increasing its contribution to the project by about $3.5 million, its second increase in less than six months 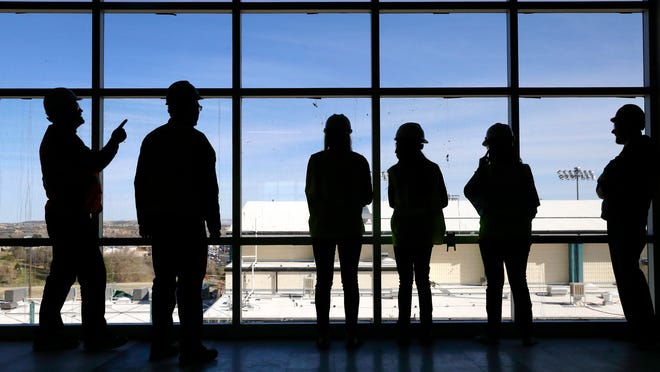 FARMINGTON — The Farmington Municipal School District's contribution to the new Farmington High School project could increase by about $3.5 million.

The news comes as officials finalize the cost of the second phase of the project.

At an April 5 special meeting, the district's Board of Education is scheduled to vote on a resolution to increase the district’s budget for the project from about $32.5 million to about $36 million, according to Ted Lasiewicz, the district's chief of operations.

The price tag for the entire project is about $73 million.

Lasiewicz said the increase will not be finalized until district officials hear how the New Mexico Public Schools Finance Authority will contribute to the growing scope of the 214,400-square-foot project.

The state education finance organization is currently funding about 59 percent of the project, which is about $41 million.

The district’s construction budget was about $31 million before about $1.2 million was added to account to fund additional work on the foundation of the new school's gym, Lasiewicz said.

Sanjay Engineer, the FBT Architects chief architect on the project, told The Daily Times in October that the soil at the site required special deep foundation work.

The board on March 10 instructed Lasiewicz to proceed with the construction and said they would look at financing the increased construction costs.

In a recent interview, board President Kyle Rhodes said the board wants to build a school that will last at least 50 years, and they don't want to "scrimp" on the design.

Lasiewicz said the cost increase stems from finalizing the design and meeting the needs of various departments, teachers and administrators.

Rhodes said the board does not want to spend all of its 2014 bond money on the project and is looking at spreading a portion of the costs to a future bond election in February 2017.

The district has about $4.6 million left from the $35 million bond that voters approved in February 2014.

Randy Bondow, the district’s finance director, said the bond election next year could be about $26 million, but the figure is still being finalized.

Work on the new high school's cafeteria and the fine arts building is not expected to start until summer 2017, and money from the future bond could cover some of those costs, Lasiewicz said.

“A number of the items that can be cut if necessary aren’t going to happen until 2017,” Rhodes said. “We have time to take those back out.”

The cafeteria is set to become a new weight room and practice space for the Kelly Greens dance team.

Work on the fine arts building includes adding two classrooms and renovating the band, orchestra and choir rooms, as well as replacing the roof and installing a black box theater in the auxiliary gym.

“We want to do the best we can for our students, not only now but for the future with the amount of money we have been given,” Farmington High Principal Tim Kientz said. “Our goal is to be efficient and effective and make sure it’s something the community is proud of.”

Last week, Kientz joined Lasiewicz and board Vice President Mike Isaacson on a tour of the new three-story classroom building that crews are constructing in the middle of the campus. The interior of Building A is nearly complete, and crews last week were touching up paint and installing equipment in the 51,317 square-foot facility.

The building has 34 classrooms, two project labs, one senate/business area and two teacher workrooms. During the second phase of construction, students and staff will be housed in Building A and about 24 portable classrooms across the campus.

Demolition will start on most of the buildings on campus this summer,  Lasiewicz said, and that is expected to take about six months to complete.