FARMINGTON — New projects approved by the Bloomfield school board include building a nearly 9-mile fiber-optic connection to Blanco Elementary School and increasing bandwidth at district buildings with the help of federal and state funding.

During its March 8 meeting, the Bloomfield School District Board of Education approved a $275,064 bid from Network Cabling Inc. to install the fiber-optic cable from Blanco elementary to the district’s Rio Vista building, which houses the district's technology services, according to Russell Florez, the district’s director of information technology. The new connection will group all the schools in the district on the same fiber-optic network.

The district will receive about 80 percent of the project’s funding from the federal E-Rate program and another 10 percent from the New Mexico Public School Facilities Authority, Florez said. That means the district's share comes to about $27,500.

The E-Rate Program offers discounts on telecommunications and Internet access for eligible schools and libraries.

The school board also approved an agreement with FastTrack Communications to be the district’s Internet service provider and to install a fiber-optic cable from the district’s administration building to FastTrack’s network.

Florez said the E-Rate program will also pay about 80 percent of the cost to install the fiber-optic cable from the administration building to FastTrack’s network, and the district's Internet service provider costs.

With the help from the E-Rate program, Florez said the district’s yearly Internet service costs will be about $14,000 to $18,000.

The new agreement also promises to increase the bandwidth district-wide from 200 megabits per second to about 3 gigabits per second. That is enough speed to provide nearly every student in the district with a 1 megabit per second connection, which Florez said is in line with Federal Communications Commission recommendations. 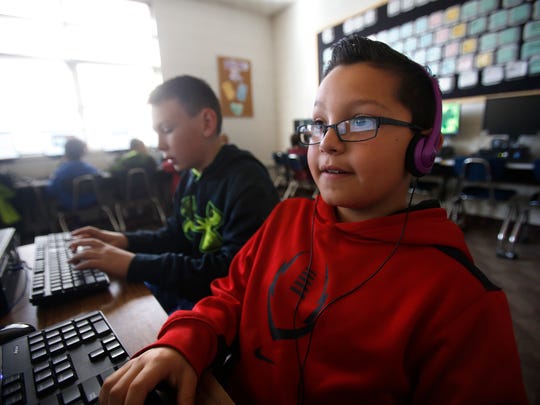 Blanco elementary is currently connected to the district’s network by microwave towers.

Florez said he hopes construction will start on both fiber-optic projects during the summer and be finished before the end of calendar year.