A Flora Vista woman is accused of trafficking narcotics after allegedly selling methamphetamine to a person in a gas station bathroom.

The defendant has been released from the county jail

FARMINGTON — A Flora Vista woman is accused of trafficking narcotics in a gas station bathroom after investigators say she sold methamphetamine to a person associated with the regional narcotics task force.

Emilia Salazar, 37, is accused of a second-degree felony count of trafficking controlled substances, according to the criminal complaint.

The defendant did not have legal representation on May 19.

The investigation was handled by the Region II Narcotics Task Force.

The unit is comprised of investigators and officers from the San Juan County Sheriff's Office along with the Aztec, Bloomfield and Farmington police departments.

A confidential source on March 17 told a Region II narcotics agent that they had organized a possible meth deal with Salazar.

The controlled purchase was to occur at the Speedway gas station at 5702 U.S. Highway 64 between Farmington and Bloomfield. The agent and source traveled to the gas station to make the buy. 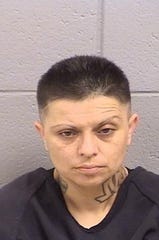 A blue passenger car pulled into the parking lot and parked next to the source and agent.

Salazar exited the vehicle, as the agent identified the defendant from a recent jail booking photo, according to court records that indicate she then walked up to the driver's side window and started a conversation with the agent and source. During that time, Salazar allegedly showed off a clear, plastic bag with a clear, crystalized substance inside.

She then put the alleged meth inside her shirt as the source and Salazar went inside the gas station to conduct the purchase. The purchase allegedly occurred in the gas station bathroom, according to court records.

The source returned to the vehicle and gave the agent the plastic bag. The substance later tested positive for the presence of meth.

Salazar has been booked into and released from the San Juan County Adult Detention Center.

She also has a pending case in Farmington Magistrate Court for a fourth-degree felony count of possession of a controlled substance.