Myles White pleaded no contest to vehicular homicide after striking a woman with his vehicle in 2018 while she stood in her own yard in Farmington.

Suspect faces up to six years in a state prison 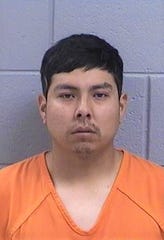 FARMINGTON — A man charged with fatally striking an elderly woman with a vehicle while she was in her own yard has entered a no-contest plea to a lower count of homicide by vehicle. The incident occurred in 2018 after he inhaled from a can of pressurized air.

Myles White, 24, pleaded no contest to a third-degree felony count of homicide by vehicle on Feb. 24, according to a plea agreement. He is awaiting sentencing as the state courts react to the coronavirus pandemic.

He was charged with killing 76-year-old Theresa Morris on May 24, 2018 in the 700 block of West Apache Street in Farmington by striking her with a Chevy Malibu passenger car, according to The Daily Times archives.

White was observed driving east bound in the opposite lane of traffic along West Apache Street when he left the roadway, struck Morris while she was in her yard and then drove into a brick fence.

An officer at the scene described White as acting in an erratic fashion and making movements like people who have been huffing air duster.

White was facing four charges including a second-degree felony count of homicide by vehicle (DWI) and petty misdemeanor counts of failure to maintain safe lane and driving without a license, according to the criminal complaint.

All charges but the third-degree felony charge of homicide were dismissed as part of the plea agreement.

Eric Morrow, White's attorney, told The Daily Times his client believes it was an accident that he feels terrible about and that it wasn't a crime.

"Myles had been up all night before the accident caring for his child, who was ill. This was the primary reason he fell asleep at the wheel," Morrow said. "Alcohol was not involved but he did briefly inhale an air duster. He tried this once before and it did not make him sleepy."

San Juan County Chief Deputy District Attorney Dustin O'Brien said it was going to be difficult to prove that there was a substance in the compressed air for the second-degree felony count of homicide.

He added it was clearly a reckless decision made by White and the third-degree felony conviction was the appropriate plea.

In terms of sentencing, O'Brien said the prosecution will support whatever the Morris' family requests.

The conviction carries a maximum sentence of six years in the New Mexico Department of Corrections.

White has no previous criminal history before the homicide, O'Brien said.

A March 24 sentencing hearing was postponed to the coronavirus pandemic. It has not been rescheduled.

White remains out of custody while being monitored by pre-trial services.