A Farmington man is accused of stabbing another man several times in the face and neck near a Farmington gas station.

Suspect has had 11 felony charges dismissed since January 2018 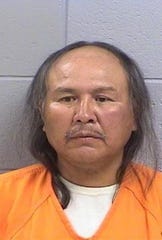 FARMINGTON — A Farmington man is accused of stabbing another man several times in the face and neck and bragging to police that he had previous criminal cases dismissed because he was found incompetent for trial.

Etcitty allegedly stabbed another man on April 30 near the Speedway gas station at 507 E. Broadway Ave., according to the arrest warrant affidavit.

He did not have legal representation on May 8.

The affidavit did not list a time for the incident, but Farmington Police Department call logs listed one incident at 9:19 p.m. at 507 W. Broadway Ave on April 30.

The gas station is just east of the Dollar Tree store at 501 W. Broadway Ave.

Officers were dispatched to the business on reports of a stabbing.

The male victim was transported to the San Juan Regional Medical Center Emergency Room after being found bleeding heavily from his neck and face. Court documents describe three lacerations.

A male witness told police said Etcitty and the victim got in an argument, which led to Etcitty stabbing the other man. The man initially though Etcitty was punching his friend.

The victim told police a man named George injured him.

Etcitty was detained and told police he took the knife from the victim and used it on him.

A female witness told police Etcitty said he "got the male" in the face and back, hurting the man.

She said Etcitty carried an eight-inch-long knife that was not recovered by police.

The motion said the defendant bragged to police that he had criminal cases dismissed because he was found incompetent to stand trial, inferring he would avoid prosecution in this case.

Etcitty has had a total of 11 felony charges dismissed by the prosecution since January 2018, according to court records.

The Daily Times has written about Etcitty twice in recent history.

He was accused of a Dec. 30, 2019, stabbing in Farmington and a July 3, 2017, incident where he allegedly beat two relatives with brass knuckles at the Motel 6 at 1600 Bloomfield Boulevard.

Those cases were dismissed by the prosecution.

A hearing on the motion is set for the morning of May 12 in Aztec District Court.

His preliminary hearing is scheduled for the morning of May 13 in Farmington Magistrate Court.