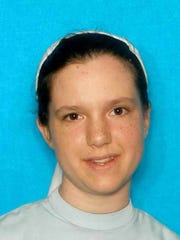 FARMINGTON — An autopsy has confirmed that the woman found dead in northern Arizona on Feb. 21 is 27-year-old Farmington resident Sasha Marie Krause. Investigators say she was kidnapped and murdered.

The San Juan County and Coconino County sheriff's offices, along with federal authorities, have transitioned the investigation into a kidnapping and murder case as they work to identify and apprehend the individual responsible for the crimes, according to San Juan County Sheriff Shane Ferrari.

Ferrari announced on the morning of Feb. 25 in a Facebook video that the remains of a woman found north of Flagstaff, Arizona were Krause after an autopsy was performed on Feb. 24.

A Coconino County Sheriff's Office press release issued on Feb. 25 stated fingerprints collected at the scene were matched with the Texas Motor Vehicle Department’s driver's license records to confirm her identity around 8 p.m. on Feb. 24.

The Coconino County Sheriff's Office in Arizona released information on Feb. 24 that a woman matching the general description of Krause was found on Feb. 21 in the area between Wupatki National Monument and Sunset Crater Volcano National Monument, north of Flagstaff.

Her body was transported to the Medical Examiner's office in Flagstaff on the night of Feb. 21.

Krause had been missing since the night of Jan. 18. San Juan County deputies were dispatched in the early hours of Jan. 19 to the Lamp & Light Publishers on County Road 5577 in the Crouch Mesa area on reports of a missing woman.

Ferrari said with the limited information at the scene of her disappearance it was difficult to determine if Krause was voluntarily missing or if the agency was conducting a kidnapping investigation.

"During this time, there was a lot of information over social media claiming we had in fact found the body of Sasha Krause," Ferrari said in the video. "Without an autopsy, we could not confirm that."

Ferrari shared his condolences with Krause's family on behalf of the Sheriff's Office and thanked the community for sharing information on her disappearance.

A $50,000 reward was offered for information that leads to the recovery of Krause.

The Coconino County Sheriff's Office is requesting anyone with information on the incident contact Detective Jones at 928-226-5038 or the Silent Witness line at 928-774-6111.