A former employee of a business inside Animas Valley Mall allegedly attacked his former boss, knocking him unconscious.

The suspect is being held without bond at county jail

A former employee of a business inside Animas Valley Mall allegedly attacked his former boss, knocking him unconscious and leaving him with a broken nose.

Justin Nachreiner, 24, is accused of a third-degree felony count of aggravated battery, according to court records.

Nachreiner allegedly battered the manager of the Journeys shoe store in January 2019 in the Animas Valley Mall in Farmington, according to the arrest warrant affidavit.

Shane Goranson, Nachreiner 's attorney, did not respond to a request for comment.

A Farmington Police Department officer was dispatched around 6:20 p.m. on Jan. 19, 2019, to the Journeys store in the mall on reports of a battery. 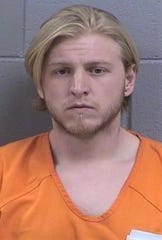 Two female employees told the officer that Nachreiner had struck the store manager and left the scene.

Nachreiner arrived at the business to pick up his paycheck and went to speak to the man in the back of the store.

They told the officer they heard a loud noise from the back of the business then saw Nachreiner angrily leave the store.

They went to the back room and found the manager sitting in a chair unconscious with blood on the floor in front of him.

The women provided a clothing description of Nachreiner, who has a name tattooed on his neck, according to court documents.

The injured man was transported to San Juan Regional Medical Center for treatment.

Support local journalism: Subscribe to The Daily Times today for a special offer.

He told the officer he sent a group message to his employees to pick up her their paychecks.

The manager told Nachreiner "things are not working out," and the defendant became upset as he was fired from his job, according to court documents.

He told the officer he knew he was struck by Nachreiner but did not know how as he was knocked unconscious and everything went black.

Before paramedics arrived, he said he could feel his nose was broken and he "popped it back into place."

The manager suffered a nasal fracture and a mild concussion.

His preliminary hearing is set for the morning of Feb. 19 in Farmington Magistrate Court.