Farmington man accused of groping teen girl while in a vehicle

A man accused of groping a minor female's breast over her shirt has denied making sexual advances and threatening her.

Farmington man accused of groping teen girl while in a vehicle

The alleged incident happened on Dec. 5

FARMINGTON — A Farmington man accused of groping a minor female's breast over her shirt has denied touching her or making sexual advances.

Zechariah Shay, 19, is accused of a fourth-degree felony count of criminal sexual contact of a minor, according to court records.

The defendant allegedly made sexual contact with the minor while they were in his vehicle on Dec. 5, according to the arrest warrant affidavit. The alleged victim recorded some of her interactions with the suspect during that ride and gave the video to investigators.

A Farmington Police Department officer was dispatched to a high school in Farmington on Dec. 6 on a report of criminal sexual contact.

Others are reading: Colorado man gets 3 years in prison for traveling to meet teenage girl for sex

The officer spoke to the female student in a school office. She described Shay as an acquaintance who was giving her a ride to an appointment on Dec. 5 when she said the incident happened.

After Shay dropped off another passenger, the defendant allegedly propositioned the girl for sex. 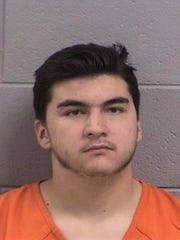 She stated Shay then "groped" her breast over her shirt and squeezed her thigh, according to court documents.

The girl added Shay threatened her, stating "I'm gonna have to choke you," after she told him she would not have sex with him.

When she told Shay about her boyfriend, the defendant allegedly responded by stating "it's not cheating if no one finds out," according to court documents.

The officer spoke on the phone to Shay on Dec. 8.

Shay denied most of the girl's accusations, including that he propositioned her for sex, that he groped her and that he said he was going to choke her.

The officer later reviewed two videos the girl recorded of the vehicle ride with Shay.

In one of the videos, the girl is heard yelling at Shay to "stop" as it appears she is pushing or hitting his hand away, according to court documents.

Shay can be heard in the second video stating he wanted to have sexual contact with the girl, the affidavit states.

Shay was released on his own recognizance on Jan. 16 from the San Juan County Adult Detention Center.

His preliminary hearing is set for the morning of Feb. 19 in Farmington Magistrate Court.