A Bloomfield man is accused of trying to take a taser from the hand of a Bloomfield officer as he resisted arrest after allegedly stealing beer.

The suspect is being held at county jail without bond

FARMINGTON — A Bloomfield man is being held without bond at the county jail after being accused of trying to take a taser from the hand of a Bloomfield officer as he resisted arrest for stealing two beers from a gas station.

Horacio Lucero, 30, is accused of four charges including a third-degree felony of disarming a peace officer and a fourth-degree felony count of possession of a controlled substance, according to court records.

Sarah Field, Lucero's attorney, did not respond to a request for comment on Jan. 24.

A Bloomfield Police Department officer and a reserve officer were driving on Jan. 18 when they heard a call about alleged shoplifting from the Speedway Gas Station at 602 W. Broadway Blvd. A time was not listed in the probable cause statement.

As the patrol vehicle pulled into the parking lot of the gas station, the statement said they observed Lucero waking out of the store. An employee who saw the vehicle pointed at Lucero. The officer recognized Lucero, as the defendant was known by police to flee or attempt to flee from officers.

The probable cause statement describes the efforts it took the three officers to detain Lucero, including using a taser on him twice. Lucero is accused of trying to pull away from an officer as he tried to place handcuffs on him.

Documents indicate that officers tried to take Lucero to the ground for resisting arrest, but Lucero tried to flee and only made it about 10-15 feet before an officer grabbed his right leg. Lucero allegedly did not respond to instructions to put his arms behind his back and was threatened with use of a taser if he did not comply. 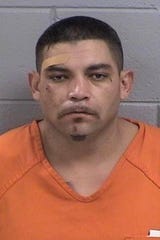 The defendant was tased once by an officer, then the narrative states that Lucero used his left hand to grab the taser and tried to wrest it away from the officer's hands. The officer was able to pull the taser away from Lucero's hand and it was used a second time on the defendant.

The second use of the taser was apparently effective as the suspect put his hands behind his back, and he was placed into handcuffs. A small amount of blood was found on Lucero's face, but he said he wasn't injured.

A small purple aluminum cylinder was found inside his pants pocket, which police say had a small bag of a substance which tested presumptive positive for methamphetamine.

The gas station employee stated that Lucero put two 40-ounce bottles of beer in his pants and then started to walk out. The employee added the defendant did not return the beer.

The defendant is being held without bond pending trial at the San Juan County Adult Detention Center.

His preliminary hearing is set for the morning of Jan. 30 in Aztec Magistrate Court.