A man is accused of 14 charges across two criminal cases for multiple vehicle burglaries on the northeast side of Farmington — and one home burglary.

FARMINGTON — A Farmington man is accused of 14 charges across two criminal cases for multiple vehicle burglaries on the northeast side of Farmington.

Kory Galbraith, 28, is accused of eight felony counts of auto burglary, a felony count of residential burglary and other charges, including possession of a controlled substance and resisting an officer, according to court records.

Galbraith allegedly burglarized eight vehicles and one residence, along with committing fraudulent use of a bank card, possessing heroin and resisting arrest, according to court documents.

Hunter Hoaglund, Galbraith's attorney in one criminal case, did not respond to requests for comment.

A Farmington Police Department officer was dispatched around 5:11 p.m. on Jan. 2 to Crestwood Drive off of Foothills Drive on reports of a suspicious man, according to the arrest warrant affidavit.

A woman told police she saw a man later identified as Galbraith in her driveway looking into her vehicles. 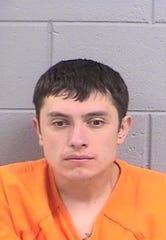 She added when she confronted the man, he told her he was looking for his dog, then he walked away. A man saw Galbraith flee into a nearby wooded area.

A center console tray from a vehicle full of coins, keys and a garage door opener was found at the "dead end" of Crestwood Drive.

Other items, including a black and tan purse, checkbooks and a pink wallet were also found near the tray.

Galbraith was identified around 7:17 p.m. from a Facebook post. A sergeant received an anonymous tip that Galbraith was in the Animas Trailer Park in the 4600 block of Gila Street.

The defendant was contacted at the trailer park minutes later and was wearing clothing matching a description given to police. He was taken into custody after a brief struggle and refused to talk to police.

Two 9mm cartridges were found near his vehicle on the ground.

Galbraith also allegedly burglarized a residence in the 6000 block of Bent Tree Circle, according to court documents. He is also accused of making about $143 in purchases using a stolen bank card.

Two of the auto burglaries occurred in the 6400 block of Castle Rock Circle. The affidavit listed the victims but did not list the addresses for most of the burglaries.

Police are still investigating tips it has received from residents who believe they might have been victims of auto burglary between Dec. 1 and Jan. 2, according to Farmington Police Department Spokesperson Nicole Brown.

Galbraith was released from the San Juan County Adult Detention Center on Jan. 13.

He waived his preliminary hearing in one of the cases on Jan. 15 and is set for another on Jan. 22 in Farmington Magistrate Court.

Anyone with information on vehicle burglaries between Dec. 1 and Jan. 2 is encouraged to call Detective Hardy at 505-258-5144.

Joshua Kellogg covers breaking news for The Daily Times. He can be reached at 505-564-4627, or via email at jkellogg@daily-times.com.