A Farmington man is accused of raping and groping a woman in December, and leaving the woman with injuries.

Woman had bruises on right leg and arm from alleged incident

FARMINGTON — A Farmington man is accused of raping and groping a woman in December, leaving the woman with injuries.

The defendant allegedly raped, touched the unclothed intimate areas of a woman and restrained her during an alleged incident on Dec. 17 in San Juan County, according to the arrest warrant affidavit.

Shane Goranson, Carrillo's attorney, did not respond to requests for comment on Jan. 7.

A San Juan County Sheriff's Office detective on Dec. 17 spoke to a woman, who was reporting a sex offense.

The woman described in graphic detail the alleged incident in her pickup truck on the night of Dec. 15, according to court documents. 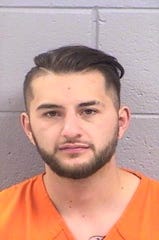 The woman told the detective she decided to meet up with Carrillo and hang out.

She picked up Carrillo in her vehicle, got a chai latte and drove to an area to watch the snowfall.

Carrillo and the woman started to "make out," then the defendant allegedly tried to pull her pants down.

The defendant then is accused of groping and raping the woman in the vehicle.

Carrillo is also accused of choking the woman during the incident and ignoring her requests for him to stop.

The defendant allegedly drew an "I and a heart" on the window then told the woman "I should wife you up shouldn't I."

"The comment seemed to be said in a manipulative manner and make (victim) feel better about the crime Dominic had just committed," the detective noted in the arrest warrant affidavit.

The woman told the detective she was unsure if Carrillo was on any "substances" but she smelled the odor of alcohol from the defendant.

After the alleged incident, the woman drove Carrillo home then she drove to her residence.

Bruises were found on the woman's right leg including her thigh, calf and knee along with her right forearm.

Carrillo was released on his own recognizance on Dec. 23 from San Juan County Adult Detention Center after being booked on Dec. 19, according to jail records.

The defendant's preliminary hearing is set for the morning of Jan. 23 in Aztec Magistrate Court.