A former Aztec High School teacher is expected to plead guilty to alleged "consensual statutory rape" of a then 17-year-old female student.

The suspect has been in county jail since August 2018

FARMINGTON — A former Aztec High School teacher is expected to plead guilty to one felony sex charge this week for alleged "consensual statutory rape" of a then 17-year-old female student.

James Coulter, 33, is currently facing two, fourth-degree felony counts of criminal sexual contact and has been incarcerated at the San Juan County Adult Detention Center since his arrest on Aug. 7, 2018.

He is accused of two incidents of criminal sexual contact with the student in November-December 2015 at Aztec High School and at his residence, according to The Daily Times archives.

The defendant was scheduled to start a jury trial on Dec. 11 when it was reset for a change of plea hearing at 2:30 p.m. on Dec. 13 in Aztec District Court.

San Juan County Chief Assistant District Attorney Dustin O'Brien and Coulter's attorney Sara Field told The Daily Times Coulter is expected to plead guilty to one of the criminal charges he is facing.

O'Brien described the allegations against Coulter as "consensual statutory rape."

Coulter faces a maximum sentence of 18 months for the conviction. If convicted, he will have to register as a sex offender.

Field said the plea offer is probably the best outcome that can be expected, and it's in her client's best interest.

"Considering the small amount of time he was facing for what we charged, the plea is reasonable," O'Brien said.

The charges against Coulter have evolved over time.

The case was amended a third time, on Oct. 29, to the current charges by District Court Judge Louis E. DePauli, Jr. of the Gallup District Court. 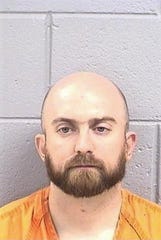 Judge DePauli wrote that the prosecution conceded there was no evidence Coulter used any force or coercion on the teen, as cited in state law.

O'Brien said the DA's office tried to prosecute Coulter with the second-degree felonies but said Judge DePauli probably made the correct decision.

"It's unfortunate that a school teacher can take advantage of a student and only be facing 18 months," O'Brien said.

In documents filed in the case, Field said the teen confirmed the consensual nature of the relationship with Coulter.

Coulter is also a component of a civil lawsuit against the Aztec Municipal School District Board of Education and Superintendent Kirk Carpenter filed by Jamie Lattin, Casey Jordan Marquez's mother.

The complaint claims negligence in the operation of Aztec High School by the defendants in the sexual abuse and harassment her daughter suffered from Coulter.