A San Juan County man accused of sexual assault and assault has been dismissed from the local police academy and suspended as a volunteer firefighter.

FARMINGTON — A San Juan County man accused of two counts of sexual assault and assault has been dismissed from the local police academy and suspended as a volunteer firefighter due to the allegations.

The defendant is accused of assaulting a woman and sexually assaulting her twice on Nov. 14, according to the arrest warrant affidavit.

Eric Morrow, Fetrow's attorney, told The Daily Times his client is innocent, that the alleged victim attempted to extort Fetrow and that the allegations are false.

Sgt. Jeremy Hill, the new director of the local police academy, declined comment on the allegations against Fetrow but stated Fetrow was dismissed from the academy because of the allegations. 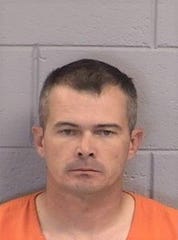 Fetrow was suspended from the county fire department after he was arrested, according to San Juan County Spokesman Devin Neeley.

The defendant will remain suspended pending the outcome of the criminal case, and he has returned his department-issued pager, radio and all fire equipment, Neeley said.

A San Juan County Sheriff's Office detective was assigned the case on Nov. 20.

The woman told law enforcement the incident occurred on Nov. 14 at her residence.

According to a court document, Fetrow told the woman a friend of theirs was admitted to the hospital for complications of cancer and he wanted to speak to her, then the defendant arrived at the woman's residence and they spoke in the living room.

The woman told the detective Fetrow was emotional and started to kiss her.

She stated earlier in the interview they "broke off the engagement" around Oct. 24, after being together for about two years.

Fetrow allegedly forced the woman to the floor and sexually assaulted her twice until she screamed and pushed him away, according to court documents.

He later left the residence and the document states that the woman called her mother and told her about the alleged incident.

The detective spoke to three people during the investigation. All three stated the woman contacted them on Nov. 14 and told them about the alleged sexual assaults.

Fetrow spoke to the detective and denied having sex with the woman on Nov. 14, according to court documents.

A DNA sample from Fetrow was collected and his cell phone was seized as evidence.

Fetrow was booked and released from the San Juan County Adult Detention Center on Nov. 25.

His preliminary hearing is set for the morning of Dec. 12 in Aztec Magistrate Court.