An Aztec man is accused of trafficking heroin and distributing marijuana following an investigation by the local narcotics task force.

FARMINGTON — An Aztec man is accused of trafficking heroin and distributing marijuana following an investigation by the local narcotics task force, which set up a narcotics purchase using Facebook.

The defendant did not have legal representation on Dec. 2.

The investigation was handled by the Region II Narcotics Enforcement Task Force, which is comprised of officers and investigators from the Aztec, Bloomfield and Farmington police departments along with the San Juan County Sheriff's Office.

A narcotics task force agent learned on the afternoon of Dec. 19, 2017, that Mobley had an active arrest warrant.

Mobley had been under investigation by the task force as agents believed the defendant may have been involved in trafficking narcotics.

Using the social media account, the agent organized a purchase of heroin and marijuana from Mobley on Dec. 19, 2017, according to court documents. 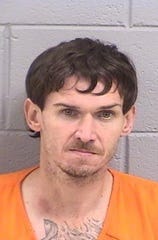 A van parked in front of the residence was registered to the defendant.

Mobley allegedly told the agent to meet at a gas station in Aztec for the purchase. While Mobley was enroute to the gas station, a traffic stop was conducted on the van.

Others are reading: Notable takeaways from the 2019 football season in San Juan County

The defendant was told about the fake Facebook account and that he was speaking to a narcotics task force agent the whole time.

Two small plastic bags were found in the waistband of Mobley's pants. The substances tested presumptive positive for the presence of marijuana and heroin.

Mobley has four felony narcotic convictions, according to court records.

He is incarcerated at the San Juan County Adult Detention Center on a $10,000 cash at 10 percent bond.

His preliminary hearing is set for the morning of Dec. 4 in Farmington Magistrate Court.