Everyone who attends San Juan County Fair can find a food to satisfy their cravings. Here's a look at some of the offerings this year.

Some food vendors were setup near carnival rides, games 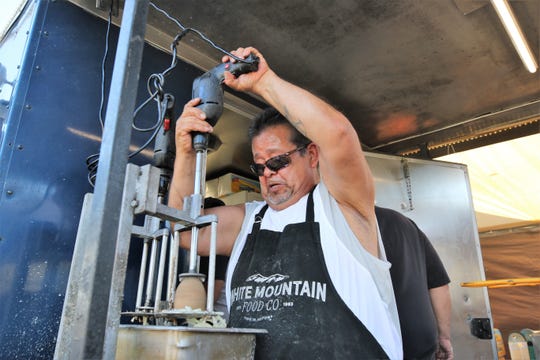 FARMINGTON — The smell of grilled meats dominated a cluster of food vendors at this year's county fair, providing a variety of options for those attending the fair.

The San Juan County Fair at McGee Park runs through Aug. 17 and has brought several food vendors to the fairgrounds, including a booth focused on fried snacks including Oreo cookies and cheesecake.

Some of the food vendors are setup up near the carnival rides and games on the east side of the fairgrounds. A majority of the vendors setup outside the convention center, multi-use building; near the picnic tables on the patio and near the covered pavilion where bands perform.

Trey and Meshan Foutz were handling orders for roasted corn at the Cornamania stand.

Meshan Foutz's family has been operating the stand for more than 20 years, which was started by her father Steve Nygren. Meshan Foutz worked alongside her eight siblings when they were children.

The roasted corn is dipped in butter, and people can put toppings including lemon pepper, garlic salt and Parmesan cheese on the corn.

Those who patron the stand can also make an elote by coating the roasted corn in mayonnaise and applying a variety of toppings, according to Meshan Foutz.

Meshan Foutz enjoys putting Parmesan cheese and lemon pepper on the roasted corn, stating it's an amazing combination of flavors.

The Purple Cow Kafe food truck was swamped with orders during the evening of Aug. 13.

Owner Jeanne Stark-Callis operates the seasonal café at Sutherland Farms and handles catering events year-round. She enjoys catching up with people at the fair.

"It's a lot of work but it's fun to get with the people and see people come back that's been here year after year," Stark-Callis said. 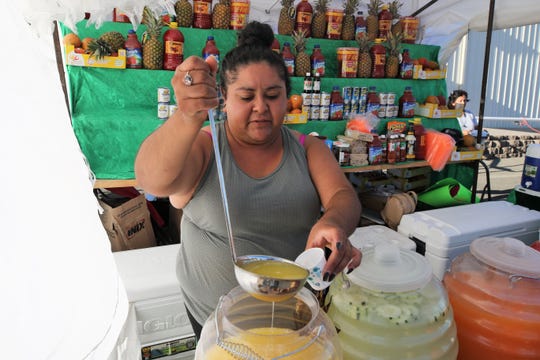 Izuri Garcia of Las Comadres was happy the food booth her mother owns was setup outside for this year's fair. The last two years the stand was situated inside the multi-use building. Garcia was happy to be outside this year — near the patio seating area —because it receives more foot traffic.

The booth offers a variety of drinks including pineapple, cucumber and watermelon lemonades as well as horchata and drinks made with blended-up fruit mixed with water, sweetener and lime juice.

Garcia said the first couple days of the fair are slow but as the fair approaches Wednesday, Thursday and Friday, the size of the crowd increases. 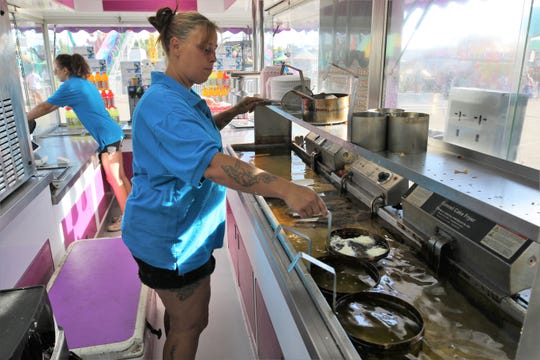 Those seeking a sugary treat can try a fried Oreo cookie or Snickers candy bar at the Funnel Cakes booth setup near the carnival rides and games.

"It's the Oreos, Snickers and the cheesecake that are our big sellers but obviously the funnel cakes," Decker said.

The stand is offering ice cream funnel cakes this year, where soft-serve ice cream is served on the funnel cake.