Shiprock man Tavor Tom, who is accused of murdering his aunt, confessed to stabbing her several times and stealing her vehicle, court documents state.

The defendant's mother told investigators he was addicted to the cold medicine Mucinex.

FARMINGTON — The Shiprock man accused of murdering his aunt confessed to stabbing her several times, then stealing her vehicle so he could shoplift cold medicine from a Farmington Walmart to feed his addiction.

Tavor Tom, 18, was arrested on July 3 in Farmington by FBI special agents in connection with the death of his aunt, according to court documents.

Tom is accused of murdering his aunt on the night of July 2 at her residence in Shiprock, according to the criminal complaint.

The defendant made his first appearance in front of Federal Magistrate Judge B. Paul Briones on the morning of July 5 in the Farmington Municipal Court building. 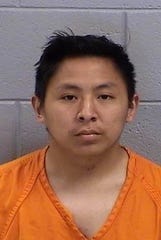 The court documents do not identify the aunt by name, only listing her birth year as 1974.

She was found in a bedroom in her residence, just east of a dental clinic along U.S. Highway 491 in Shiprock, according to court documents. The woman was found by her father on the morning of July 3.

Tom confessed to the murder during an interview with an FBI special agent on July 3 at San Juan Regional Medical Center in Farmington. The court documents state that Tom said he took a folding knife from his father's vehicle with the intention of stealing his aunt's SUV so he could drive it to Farmington and steal Mucinex.

Tom's mother told investigators her son was addicted to the cold medicine and would use it to get high. His mother believed her son was the person who killed her sister.

Tom stated during the FBI interview that he went to his aunt's residence and slit her throat, then stabbed her seven or eight times in her neck, back and chest area with the folding knife.

He then told investigators he stole her black Jeep Cherokee Sport SUV and drove it to the west side Walmart in Farmington, where he stole the medication.

Tom also stated he took the back roads to Shiprock but crashed the vehicle into a fence at a church in the Nenahnezad area, telling the FBI agent he did not drive the vehicle farther as it was damaged, and he was "high" at the time.

The defendant was found in the vehicle on the morning of July 3 and transported to the hospital.

A knife with suspected blood was found on the SUV's passenger-side floorboard.

Tom's preliminary and detention hearing are set for the morning of July 9.