Chantal Morgan faces charges for allegedly hitting a woman multiple times with a baseball bat at a Farmington apartment complex.

FARMINGTON — A Farmington woman is accused of hitting another woman multiple times with a baseball bat and damaging windows at an apartment complex.

Farmington Police Department officers were dispatched on June 30 to the Eaton Village Apartments at 2550 E. 16th Street in Farmington, according to the probable cause statement.

At the apartment complex, an officer observed an altercation between two women in the stairwell of building No. 12. One of the women, later identified as Morgan, held a silver baseball bat and was arguing with the alleged victim.

When the alleged victim was questioned by an officer, she said she walked across the parking lot to visit a friend in building No. 11 and, when she arrived at the door, Morgan approached her while holding a baseball bat. 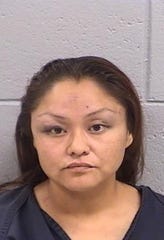 The woman said Morgan hit her with the baseball bat after yelling and accusing her of taking Morgan's boyfriend.

As the dispute continued, the alleged victim said she attempted to block hits and tried to grab the bat.

The alleged victim eventually walked back to her apartment in building No. 12 and was followed by Morgan. She said she attempted to go inside the apartment for help from her boyfriend and, when she went back outside, Morgan started yelling and hitting her again.

The officer noticed the victim had swelling to her left eye as well as bruising to the outer part of her right thigh and her right forearm. She received treatment at the scene.

The officer also noticed damage to a couple of windows at the apartment and damage to the windshield of the alleged victim's vehicle.

Morgan was interviewed by another officer and admitted to swinging the bat at the woman but denied ever contacting her body.

She was booked into the San Juan County Adult Detention Center on June 30.

During an interview with an officer at the jail, Morgan said she had been drinking with the victim and the victim's boyfriend earlier in the day.

After the alleged  victim's boyfriend passed out, Morgan said she noticed her boyfriend flirting with the victim. During the interview she denied swinging the baseball bat and hitting the woman.

Morgan made her first appearance on July 1 in Farmington Magistrate Court and was released on her own recognizance.

A preliminary examination is set for July 10 in Magistrate Court.