A Kirtland man has been arrested and accused of raping a teenage girl and making sexual contact with her.

Sexual assault happens every 92 seconds in the United States. Here's how to get help if you or someone you know is assaulted. Wochit

The alleged incident occurred during the early morning of June 3

FARMINGTON — A Kirtland man has been arrested and accused of raping a teenage girl.

He is accused of raping a 16-year-old girl on the night of June 2, according to the arrest warrant affidavit.

Sarah Field, Sorensen's attorney, did not respond to requests for comment.

A San Juan County Sheriff's Office deputy was contacted around 4:11 p.m. on June 3 on reports of a sexual assault.

The deputy conducted an interview with the teenage girl and relatives. The affidavit did not list a street or a city where the alleged crime occurred.

Sorensen, a female and a relative of the teenage girl arrived at a residence around 2:30 a.m. on June 3 after spending time at a Farmington bar.

The teenage girl heard them playing pool in the residence, and she joined them in playing pool as they drank alcohol. 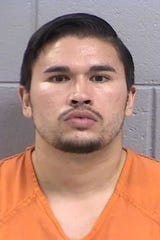 The relative and the female left the room around 4 a.m. and went to another part of the residence.

The affidavit states that Sorensen tried to kiss the teen, but she told him to stop, and when she went outside to get away from him and he followed her outside then kissed her. She told the deputy she went to bed, and when Sorensen asked to sleep in her bed and she let him.

The teen stated she then left the room and slept in a different room in the residence.

A search warrant for a sexual assault kit was executed on Sorensen.

He was contacted at his place of business then taken to San Juan Regional Medical Center, where the warrant was executed.

Sorensen refused to speak to a detective without his attorney present.

He was released from the San Juan County Adult Detention Center on a $2,000 cash at 10 percent bond, and he is required to wear a GPS monitor.

Sorensen's preliminary hearing is set for the morning of June 13 in Aztec Magistrate Court.